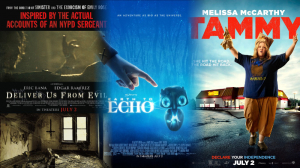 Among the new movies that were released Wednesday, July 2 are a supernatural crime thriller starring Eric Bana, a family-friendly science-fiction found-footage flick and the latest comedy in which Melissa McCarthy plays a boor.

‘Deliver Us from Evil’

Eric Bana plays a New York police officer who begins investigating a series of disturbing and inexplicable crimes and joins forces with an unconventional priest (Edgar Ramirez) to combat the frightening and demonic possessions that are terrorizing their city. (R – 118 minutes)

It is a shame that “Deliver Us from Evil’s” production was plagued by incessant hurricanes and that writer/director Scott Derrickson could only get permission to film at night. I am, of course, exercising sarcasm to make a point that dry scenes set during daytime are scarce in the new supernatural crime thriller. So is any originality (it is your standard exorcism flick), cohesiveness (its story constantly heads off in different directions) or justifiable lure (it simply is not very entertaining). Worst of all, it wastes the talent of Joel McHale who, in a supporting role, is the movie’s only worthwhile element. (Thumbs Down!)

Brian “Astro” Bradley, Teo Halm and Reese Hartwig play a kids who, after receiving a bizarre series of encrypted messages, embark on an adventure with an extraterrestrial who needs their help. (PG – 91 minutes)

Despite a second act that sags into boredom with repetitive scenes of loud chaos and an otherwise unoriginal plot that blends “E.T.” with “Chronicle,” “Earth to Echo” is an entertaining and even endearing extraterrestrial adventure. The new family-friendly science-fiction found-footage flick features an energetic pace that keeps audiences of all ages engaged and amused but it is clearly targeted to younger viewers who will be unbothered by its flaws – which include but are not limited to its predictable play-out and its slightly amateurish approach – and are less likely to be familiar with the 80’s films of which this is a direct echo. (Thumbs Up!)

During its best moments, “Life Itself” is more than just an overview of Roger Ebert’s life; it becomes an engaging examination of film criticism that addresses its roots, its advantages, its deficiencies and its future. The new documentary also becomes a celebration of life, an observation about death and any number of other things that speak to each individual viewer. As someone who has looked up to Ebert ever since I could first form conscious memories, I would have liked to have felt how cinema shaped him (as it has me) but this is still a superbly enlightening piece of entertainment. (Thumbs Up!)

Jesse Eisenberg, Dakota Fanning and Peter Sarsgaard play radical environmentalists who look to execute the protest of their lives – the explosion of a hydroelectric dam. (R – 112 minutes)

The only movement that goes on in “Night Moves” takes place at a sloth’s pace. Some may call that slow burning tension but most call it boring. The new ecological thriller features long strings of scenes without any dialogue whatsoever while the dialogue that does exist is presented with absolute apathy. Peter Sarsgaard is believable as a radical environmentalist but Jesse Eisenberg and Dakota Fanning fail to sell the same with their performances. And any intellectual message that writer/director Kelly Reichardt is attempting to relay through this story is undermined by its completely perplexing conclusion. (Thumbs Down!)

Chris Evans plays a passenger on a train that, in a future where a failed global-warming experiment kills off all life, travels around the globe via a perpetual-motion engine. When cryptic messages incite the passengers to revolt, the train thrusts full-throttle towards disaster. (R – 126 minutes)

“Snowpiercer” is one of those movies that is so bad that it is good – except for the fact that it is completely unaware of its own kitschiness causing the story’s strange self-seriousness to eventually catch up with it. The new science-fiction flick which takes place entirely on a train tries to say something significant about the class system. And, at times, its mind-bending metaphors work. But what truly fuels its perpetual-motion engine is its incomparable weirdness, which appears to be altogether unintentional. If you are willing to overlook its absurdly artistic conclusion, the first three-quarters of the ride will be fast-paced fun. (Thumbs Up!)

Melissa McCarthy plays a woman who, after losing her job and learning that her husband has been unfaithful, hits the road with her profane, hard-drinking grandmother (Susan Sarandon). (R – 96 minutes)

“Tammy” is missing the two absolutely essential elements of comedy – surprise and spontaneity. Without these, you may as well just be watching a boorish woman run around with a paper bag on her head. And that is exactly what you get with Melissa McCarthy’s new flick in which she plays pretty much the same crude character she has played thrice before in “Bridesmaids,” “Identity Thief” and “The Heat.” Unfortunately, none of it is even the least bit funny because the jokes are predictable and forced. The worst part, though, is watching McCarthy’s co-star Susan Sarandon shed an entire career’s worth of dignity and credibility in one fell swoop. (Thumbs Down!)

Paul Rudd plays the owner of a corporate candy company who meets a quirky indie shop owner (Amy Poehler). They fall in love but break up about two-thirds of the way through and she starts dating her accountant. But then he makes a big speech and they get back together. (R – 83 minutes)

Had “They Came Together” been even half as clever as its double-entendre of a title, it would have likely left viewers in stitches. Unfortunately, said title is one of only a handful of authentically creative jokes in the new parody of the romantic comedy genre whereas the rest suggest it could have instead been called “Generic Rom-Com.” That is to say that writer/director David Wain goes for the low-hanging fruit, relying on the single running gag of exposing the genre’s most basic outline rather than legitimately lampooning it. Its cast is remarkable and its subversive conclusion will get an audible guffaw but its overall lack of imagination is disappointing. (Thumbs Down!)