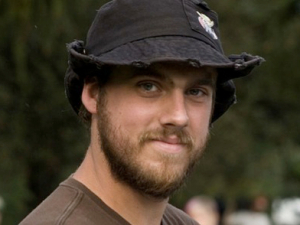 Writer/director Jim Mickle recently spoke with “Breakthrough Entertainment” about his new dramatic thriller “Cold in July.” In “Cold in July,” which opens Friday, May 30, Michael C. Hall plays a Texan who, Initially hailed as a hero for fatally shooting a low-life burglar who broke into his house, begins to fear for his family’s safety when the victim’s ex-con father (Sam Shepard) turns up in town making some not-so-veiled threats. Listen to “Breakthrough Entertainment’s” full interview with Mickle by clicking HERE. The following is an excerpt from the interview in which the writer/director discusses how his characters are created. “I used to draw storyboards and … when I think of things I think of them in black and white. So when I think of characters I sort of think of very fuzzy shapes or sometimes even just silhouettes. I am never able to look at characters and think, ‘This is McConaughey and this is so-and-so.’ I would love to be able to do that. It would make it much more easy to talk about casts with producers and stuff. “But the most beautiful thing in the world is once actors start trying clothes on. It is one of the most exciting portions of making a movie. Our costume designer Liz Vastola had a blast on this. Michael [C. Hall] had just gotten there … and we were both just sort of trying to figure out what his character was going to be. Then he started putting on these pants and these short-sleeved button-down shirts and all of the sudden that little fuzzy image in my mind solidified. “[Michael] is one of the really great actors who is able to sink into characters. When you look at the character he played on ‘Six Feet Under,’ it took a long time to accept him as Dexter. And once I had accepted him as Dexter, it was hard to accept him as anything else. Everytime he plays somebody he is able to dissolve into what that is. “That is not something you see very often. So many actors just play different versions of themselves. He was the one who suggested, ‘Hey, maybe I’ve got a mullet.’ He came in with a little bit of facial hair already and he shaved that mustache and took good care of it. It is a very cool process to see somebody not afraid to dissolve into [a character].” – Jim Mickle