‘5 to 7’ is warped, ‘Backcountry’ yields nightmares and ‘Dial a Prayer’ inspires

Among the new movies that were released Friday, April 10 are a romantic dramedy about a relationship with a catch, a thriller about a being lost in the woods with a bear and a dramedy set at a prayer call center. 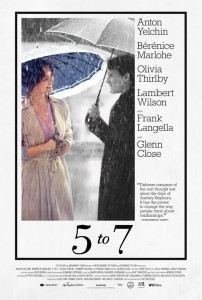 Anton Yelchin plays an aspiring novelist enters into a relationship with a woman (Bérénice Marlohe) with just one catch – she’s married and the couple can only meet between the hours of 5 and 7 each evening. Olivia Thirlby, Glenn Close, Lambert Wilson and Frank Langella also star. (R – 95 minutes)

The premise of “5 to 7” is simply too adolescent to carry much significance. Granted, it may work for a project played solely for laughs but writer/director Victor Levin attempts to extract true meaning from it and fails to do so in even the slightest fashion. Instead, the new romantic dramedy comes off as a chauvinistic male’s fantasy that slowly but surely warps into some sad-sack story someone would tell about the childhood crush they had on their babysitter. Its refined and mature atmosphere is not only a deception; it also nullifies what little entertainment value the motion picture possesses. (Thumbs Down!) 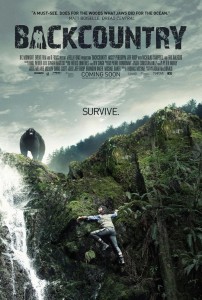 Missy Peregrym and Jeff Ropop play a young couple whose romantic camping trip becomes a tale of survival as they face the darkest side of nature – a predatory black bear. (NR – 92 minutes)

“Backcountry” will do for camping what “Frozen” did for skiing, transmitting trepidation into even the bravest backpacker. The new thriller starts off slowly with writer/director Adam MacDonald using everything from intimidating strangers to the vast setting itself to create a tension that could seemingly snap at any given moment. And snap it eventually does in such a way that is guaranteed to give you nightmares. MacDonald skillfully uses the ultimate trifecta of suspense, surprise and gruesomely graphic imagery to unnerve viewers beyond belief and leave one hell of a lasting impact on their psyches. Moreover, star Missy Peregrym’s performance is electrifying. (Thumbs Up!) 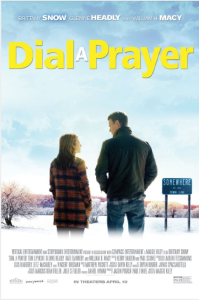 Brittany Snow plays a disenchanted young woman who begrudgingly answers phones at a prayer call center under the watchful direction of its religious leader (William H. Macy). With the discovery of her newfound gift, she struggles to reconcile her troubled past and grapples with the faith that others have started to show in her. (PG-13 – 97 minutes)

Due to its title, “Dial a Prayer” may sound like your run-of-the-mill faith-based flick but it is far more cynical than that conservative genre typically likes to be and, by refusing to play by the rules, it is also far more effective. Writer/director Maggie Kiley’s new dramedy achieves a spiritual significance that is universally palatable as its protagonist finds not religion but harmony with herself. Kiley carefully walks the line, serving up satirical comedy that is funny without offending and star Brittany Snow portrays her desperate and at wits’ end character with an authenticity that strengthens the influence of her eventual redemption. (Thumbs Up!)