Among the new movies that were released Friday, March 13 are a drama set on the streets of Belfast in 1971, a live-action adaptation of Disney’s most beloved fairy tale of all time and a modern-day fable about walking in someone else’s shoes – literally.

Jack O’Connell plays a young British soldier who is accidentally abandoned by his unit following a riot on the streets of Belfast in 1971. Unable to tell friend from foe and increasingly wary of his own comrades, he must survive the night alone and find his way to safety through a disorientating, alien and deadly landscape. (R – 100 minutes)

Much like star Jack O’Connell’s pre-”Unbroken” film “Starred Up,” “‘71” features accents that are so thick that they make it nearly impossible to understand what is being said. However, that is the least of the new drama’s problems as it also suffers from shaky camera movement, an underdeveloped protagonist and a meandering midsection. Worst of all, though, is the fact that the film never takes a moment to draw viewers into the conflict, instead resigning them to the role of detached observers. It is therefore easy to become bored with a story that, on its surface, sounds quite compelling. (Thumbs Down!) 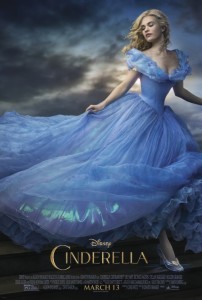 Lily James plays a young woman who finds herself at the mercy of her cruel stepmother and stepsisters when her father unexpectedly passes away. Never one to give up hope, her fortunes begin to change after meeting a dashing stranger in the woods. (PG – 105 minutes)

“Cinderella” may be the most faithful live-action adaptation of an animated film from Disney’s vault to date, capturing all of the magic of the 1950 classic without losing even one ounce of its wonder. Moreover, the new movie also authentically imitates the golden era of cinema with its old fashioned look and comforting feel – especially during the scene set at the ball. Its colors alone are beyond breathtaking. Best of all, this may be the most beautifully romantic motion picture you see all year, stealing the hearts and igniting the dreams of audiences of absolutely all ages. (Thumbs Up!) 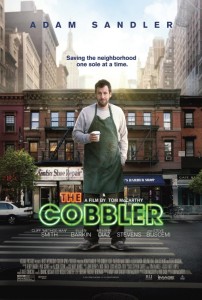 Adam Sandler plays a cobbler who stumbles upon a magical heirloom that allows him to step into the lives of his customers and see the world in a new way. Sometimes walking in another man’s shoes is the only way one can discover who they really are. (PG-13 – 99 minutes)

“The Cobbler” operates on a fantastical premise that is quite a common idiom and it is therefore surprising that it has not been actualized on the big screen until now. And although the end-result may not be as sharp as said premise’s promise and eventually veers off into a slightly disappointing direction, it is entertaining enough while also offering a fair amount of the quintessential heart one expects from a fairy tale. Star Adam Sandler is uncharacteristically-yet-welcomingly restrained in the new comedy from writer/director Thomas McCarthy, who continues his streak of making movies that are as meaningful as they are fun. (Thumbs Up!)

For the first few minutes, “Cymbeline’s” application of William Shakespeare’s classic prose in modern-day circumstances is somewhat amusing – albeit in the wrong way that renders it almost comical. Then once you realize there is some pretty serious stuff going down, the material is momentarily compelling. But try as they might, even these tremendously talented actors cannot retain a viewer’s interest in an extremely plot-heavy and confusingly muddled movie that is made worse by an antiquated language’s tendency to continuously pull them in polar opposite directions. Translation: The ear of thy work doth produce a sense of beauty but tis only skin deep much to the perplexion of thine mind. (Thumbs Down!) 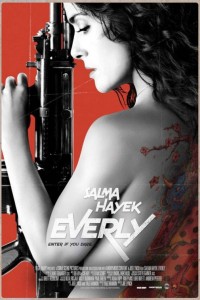 Salma Hayek plays a woman who faces down assassins sent by her ex – a mob boss – while holed up in her apartment. (R – 92 minutes)

“Everly” is probably what you would get if you locked Uma Thurman’s character from “Kill Bill” in an apartment for a few hours. Director Joe Lynch’s new actioner may be a bit low on brain-cells, but it has got more adrenaline pumping through its veins than the entire cast of “The Expendables.” As a result, the movie becomes a grindhouse throwback that will continuously draw you to the edge of your seat and blow you back into it over and over again. What the flick lacks in narrative craft it more than makes up for in kinetic creativity. (Thumbs Up!) 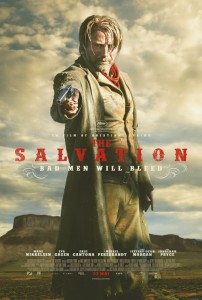 Mads Mikkelsen plays a Danish ex-soldier who, after laying waste to the scoundrels who killed his wife and son, incurs the wrath of a sadistic gang leader (Jeffrey Dean Morgan) hell-bent on hunting him down. (R – 100 minutes)

“The Salvation” will whet the appetite of western fans who know the movie marketplace has become a barren desert when it comes to the genre. Boasting beautiful cinematography that will leave you absolutely breathless, a riveting and almost dialogue-free finale and strong performances across the board from stars Mads Mikkelsen, Jeffrey Dean Morgan and Eva Green, the new drama is a quick-draw and hits its target. The story is somewhat simple as it checks off just about every box on the list of elements essential to the genre but when it comes to westerns, familiarity is fundamental. And there could be no greater compliment than to say this feels more like a time-honored favorite than modern mockery. (Thumbs Up!)

Douglas Smith plays a boy who is forced to face life with a rare condition that leaves him smelling like a fish. With his strange ailment, he sadly grows to accept that he may never find happiness – until he meets a girl (Zoë Kravitz) who seems to not notice his unique odor and wants to be his friend. (NR – 98 minutes)

Brimming with creative quirkiness in its every nook and cranny, “Treading Water” is an exceptionally entertaining modern-day fairy tale. More importantly, though, it is also genuinely charming, spreading smiles across the faces and instilling hope in the hearts of any and all viewers who may be embarrassed by their own oddities (which, if we’re being honest, is everyone on this entire earth). Although writer/director Analeine Cal y Mayor’s story is based on a real affliction, her rapturously magical approach is what truly brings the new dramedy to life and makes this bait well worth biting. (Breakthrough!)