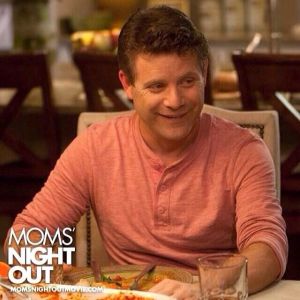 Actor Sean Astin recently spoke with “Breakthrough Entertainment” about his role in the new comedy “Moms’ Night Out.”

In “Moms’ Night Out,” which opens Friday, May 9, Sarah Drew plays one of several moms who entrust their children to their husbands for a few hours so that they can have a much-deserved grown-up evening of dinner and conversation only to discover that everything goes horribly wrong as a result.

Listen to “Breakthrough Entertainment’s” full interview with Astin by clicking HERE. The following is an excerpt from the interview in which the actor discusses what he hopes that moviegoers take away from “Moms’ Night Out.”

“I am sort of playing a character much like myself – a husband and a father of several children – somebody who is working hard and trying to do the right thing in the world who finds himself sometimes a little bit out of ammo in how to be a great husband and how to be a great father. He has to both lean on his wife and try his best to support her.

“With this film, I didn’t draw from my own life – it was my own life. The big difference is that the character in the movie is maybe a little bit better than I am. He doesn’t hesitate to be supportive when he is supposed to whereas I think I wouldn’t get as good a grade. While watching this film, my kids and my wife are going to think, ‘How is it that when you are on the screen you know exactly what to do and when you are here with us you still have… let’s say, room for improvement?’

“I think that there is an absolute invaluable takeaway for me from my character. What it does is just remind me to really try and be supportive of my spouse; to be there, to be present and to be the best that I can be for my family. I don’t know that it taught me anything new – but it is certainly a reminder of the importance of that.” – Sean Astin