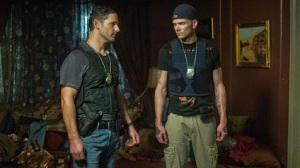 Actors Eric Bana and Joel McHale recently spoke with “Breakthrough Entertainment” about their roles in the new supernatural crime thriller “Deliver Us from Evil.”

In “Deliver Us from Evil,” which opens Wednesday, July 2, Bana and McHale play New York police officers who begin investigating a series of disturbing and inexplicable crimes and join forces with an unconventional priest (Edgar Ramirez) to combat the frightening and demonic possessions that are terrorizing their city.

Listen to “Breakthrough Entertainment’s” full interview with Bana and McHale by clicking HERE. The following is an excerpt from the interview in which the actors discuss what drew them to their respective roles.

“I am good friends with Scott Derrickson, the guy who wrote and directed it who also wrote ‘Sinister’ and ‘The Exorcism of Emily Rose’ and soon to be directing ‘Doctor Strange.’ And I thank God that I am friends with him. As he was writing this, he said, ‘I am writing this character as if it were you.’ So I went, ‘Cool. Hope I get to do it.’

“And after a lot of actors passed – and actresses as well… and trained animals – I got the nod. So that is how I ended up getting it. As far as doing more stuff like this, I had a ball. I really had a great time and will look back on it as one of the more rewarding and fun and interesting [projects that I have ever done].” – Joel McHale

“I loved the character of Ralph Sarchie and I would have played him if it was just a straight-out thriller with no horror elements. I loved his storyline. I loved his journey as a person in the script – the fact that a person does not get to progress in life until they tackle their personal demons and the fact that he was basically kind of blocked until he dealt with things in his past.

“I was just really fascinated from human level about all of that stuff. He just happened to be in a horror film with a great director. And I am really glad that I did it. It was certainly a hell of a lot of fun to play a Bronx detective. I grew up watching a lot of cop stuff and at one stage briefly entertained the idea of becoming a cop. So it was great to play a man in a uniform who wasn’t in a uniform.” – Eric Bana