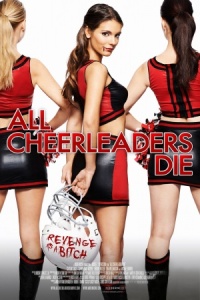 Actress Caitlin Stasey recently spoke with “Breakthrough Entertainment” about her role in the new comedic horror flick “All Cheerleaders Die.”

In “All Cheerleaders Die,” which opens Friday, June 13, Caitlin Stasey plays a rebel girl who joins her high school cheerleading squad in an effort to take down the captain of the football team. However a supernatural turn of events thrusts the girls into a different battle.

Listen to “Breakthrough Entertainment’s” full interview with Stasey by clicking HERE. The following is an excerpt from the interview in which the actress discusses what attracted her to the project, its “girl power” theme, the atmosphere on set and what she hopes viewers take away from the film.

“To be fair, first and foremost I really wanted the job. I think that everybody forgets that what attracts people to work is generally just a desire to work. I am not necessarily in a position where I can pick and choose as willfully as others. But I also just enjoyed the script. I thought that it was a really fun female-led comedy/horror – which was interesting to me.

“[The production] was really fun. The girls were great. They are all really talented, hard-working, sincere, compassionate young women and we had a really great time together. The dudes were really great as well – funny and sweet. And everybody was really respectful of each other. They were just really hard-working. When it is an independent feature, you sort of have to go above and beyond your station to make things comfortable for yourself.

“I do not really know if there is necessarily a lesson to be learned [in ‘All Cheerleaders Die’]. I think that it is just a case of come and watch this ridiculous film about these ridiculous adventures. And be good to each other. Don’t hurt each other. I guess that’s about it. There is really no morality to it.” – Caitlin Stasey