Among the new movies that were released Friday, May 1 are a dramedy in which Nick Kroll and Rose Byrne play siblings and an actioner in which Robert Downey, Jr., Chris Evans, Chris Hemsworth and Mark Ruffalo play superheroes who team up to save the planet from destruction at the hands of a villainous robot. 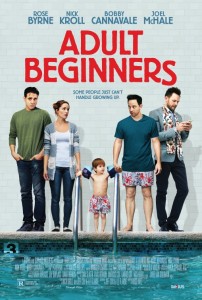 Nick Kroll plays a young, hipster entrepreneur who crashes and burns on the eve of his company’s big launch. With his entire life in disarray, he leaves Manhattan to move in with his estranged pregnant sister (Rose Byrne), brother-in-law (Bobby Cannavale) and three year-old nephew in the suburbs – only to become their manny. (R – 90 minutes)

Unlike last year’s painfully flat “The Skeleton Twins,” “Adult Beginners” is an amusing-yet-perceptive look at sibling relationships. Granted, the new dramedy does not unearth any shocking revelations; nor does it tread any new ground in terms of its story or sense of humor. However, the emotional truths behind the bond that brothers and sisters share are on explicit display in an incredibly identifiable – not to mention enjoyable – way. A great deal of the movie’s success is a direct result of its trio of talented leads, each of whom gives an earnest performance that earns our empathy while also being both affable and fun to watch. (Thumbs Up!)

Robert Downey, Jr. reprises his role as Tony Stark a.k.a. Iron Man who this time attempts to jumpstart a dormant peacekeeping program. When things go awry, he along with Captain America (Chris Evans), Thor (Chris Hemsworth) and The Hulk (Mark Ruffalo) are put to the ultimate test as they battle to save the planet from destruction at the hands of the villainous Ultron (James Spader). (PG-13 – 141 minutes)

“Avengers: Age of Ultron” is a vast improvement upon its overrated predecessor, scaling down writer/director Joss Whedon’s self-indulgent dialogue in favor of more eye-poppingly explosive action sequences. Granted, we still get Whedon’s trademark repartee, but only enough of it to contribute to character development and add a little witty relief from all of the incessant excitement. It also feels much more like a multiverse movie, meaning its myriad of superheroes unite as one massive powerhouse instead of staying in their respective corners until being called upon like last time. The end result is exhausting and invigorating entertainment that rejuvenates the action figure-loving juvenile in all of us. (Thumbs Up!)