‘After Words’ is beautiful, ‘Funny That Way’ is nutty and ‘Some Kind’ is messy

Among the new movies that were released Friday, Aug. 21 are a romantic drama set in Costa Rica, a screwball comedy revolving around the relationships of the cast and crew of a Broadway play and a romantic dramedy starring in which Pierce Brosnan plays the man in the middle of a love triangle.

Marcia Gay Harden plays a librarian who attempts to escape her midlife crisis by traveling to Costa Rica. There she meets a younger man (Oscar Jaenada) who takes her on an unexpected journey filled with adventure and romance. (NR – 91 minutes)

“After Words” is a beautiful movie – in more ways than one. First, and probably most obvious, is its Costa Rica setting that is captured so amorously by cinematographer Salvador Lleo De La Fe that it is the next best thing to actually be there. However, more importantly, is director Juan Feldman and screenwriter Joel Silverman’s story that demonstrates how truly taking advantage of all that this life has to offer is the best way to defeat depression. Star Marcia Gay Harden is excellent as a woman who experiences a transformation – both inside and out – as a result of said advise (with, of course, a little help from the aesthetics of Costa Rica). (Thumbs Up!) 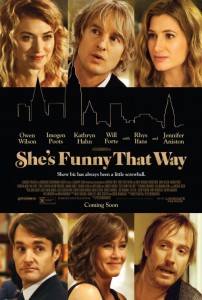 Owen Wilson plays a Broadway director who casts a call girl (Imogen Poots) in a new play to star alongside his wife (Kathryn Hahn) and her ex-lover (Rhys Ifans). Meanwhile, the call girl’s therapist (Jennifer Aniston) is consumed with her own failing relationship with the director’s playwright (Will Forte), who is also developing a crush on the call girl. (R – 93 minutes)

“She’s Funny That Way” is a delightfully charming throwback, authentically resembling the simple-yet-twisted screwball comedies of yesteryear that seem to be all but extinct. Boasting an all-star cast that includes Imogen Poots and Owen Wilson and a quick-witted screenplay by legendary writer/director Peter Bogdanovich, the new flick feels like it has been plucked right out of the golden age of Hollywood. It is bouncy, boisterous and – best of all – squirrels to the nuts from beginning to end, running on the crazy coincidences that create chaos in its amusingly neurotic characters’ lives. (Thumbs Up!)

‘Some Kind of Beautiful’ 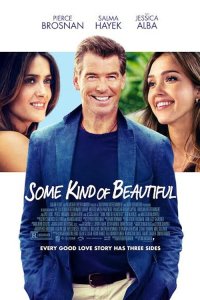 Pierce Brosnan plays a womanizing college professor who meets his match when he gets involved with cute student (Jessica Alba) and her older sister (Salma Hayek). (R – 100 minutes)

“Some Kind of Beautiful” is more like some kind of mess. Although its three stars are as charismatic as ever, its story is all over the place. The new romantic dramedy seems to be unsure of what it wants to say about relationships, jumping to a different tone and theme every other scene or so. Laughs are nonexistent and its attempts to affect audiences come across as anything but authentic. Inconsistencies in all areas are its ultimate downfall with its characters, who are indifferent one moment and outraged the next, bearing the absolute worst of it. (Thumbs Down!) 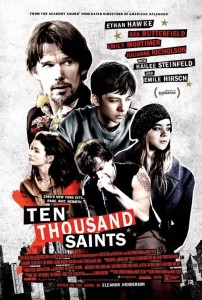 Asa Butterfield plays a boy who, while struggling with his relationship with his father (Ethan Hawke), befriends a girl (Hailee Steinfeld) who is pregnant with the child of his friend that died of a drug overdose. (R – 113 minutes)

The punk rock songs that populate the soundtrack for “Ten Thousand Saints” is exasperatingly annoying but that is more a matter of musical taste than anything. Still, it is worth noting since it has the power to inhibit a viewer’s ability to willingly forgive the film’s flaws in the midst of so much goodwill. Although the new drama features an exceedingly talented cast and themes that attempt to tug at your heart, it is far too unfocused to ever accomplish its goals or make anyone feel anything authentic. The movie is similar to a mixtape that is given to you by someone with Attention Deficit Disorder. (Thumbs Down!)