Among the new movies that were released Friday, Nov. 14 are a music-themed romantic dramedy starring Allison Miller, a faith-based Christmas flick starring Kirk Cameron and a horror-themed actioner starring Lucas Till. 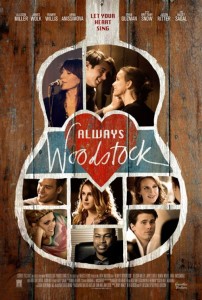 Allison Miller plays a struggling songwriter whose life in New York City falls apart. She is then forced to confront her past when she spends the summer at her childhood home in Woodstock, New York, learning that becoming successful means becoming your true self first. (NR – 90 minutes)

Allison Miller’s character in Always Woodstock” – the character who serves as the axis around which the new music-themed romantic dramedy revolves and eventually spins out of control, to paraphrase a quote from the film – is inherently unlikeable. Her sense of entitlement and inability to consider anyone else’s problems but her own, although the central conflict, make her not only annoying but also almost impossible to root for. Seeing Katey Segal in a supporting role alleviates some of the vexation but it is not enough to save this story, which follows a formulaic path to a predictable destination. (Thumbs Down!) 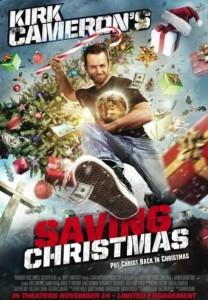 Kirk Cameron plays a man who, while enjoying the his sister’s (Bridgette Ridenour) annual Christmas extravaganza, decides to help his brother-in-law (Darren Doane), who has a bad case of the bah-humbugs, see that Jesus Christ is at the center of our Christmas celebrations and traditions. (PG – 80 minutes)

It is important to note that “Saving Christmas” barely elapses the hourlong mark, containing nearly 20 minutes of “filler” like a formal introduction, an animated opening, a blooper reel and lots and lots of closing credits. Even the central story is padded with a break dance sequence that is as annoying as it is long. However, if you can get past all of that, the new faith-based flick is certain to move you as it poignantly imparts festive food-for-thought while embodying the altruistic spirit of the holiday season. Its hand is heavy but its heart is in the right place. (Thumbs Up!) 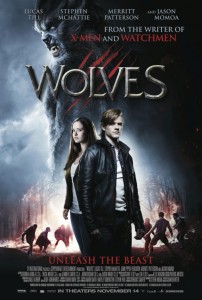 Lucas Till plays a high school student who begins changing into something vicious, unpredictable and wild. Forced to hit the road after the brutal murder of his parents, he tries to hunt down the truth behind his ancestry. (R – 91 minutes)

“Wolves” starts out decently enough but an overly stylized scene showing star Lucas Till’s character motorcycling his way across a desert landscape signals the cheesefest to come. What was once dark and moody suddenly becomes cartoonish and hormonal as the movie descends into an R-rated cinematic adaptation of a young adult novel. And while the practical makeup is impressive, the wolves are not exactly scary and are more just slight variations on “X-Men’s” Beast. Supporting actor John Pyper-Ferguson is the lone bright spot in a movie that may even make members of Team Jacob jump on the Team Edward bandwagon. (Thumbs Down!)