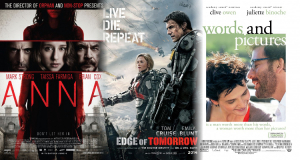 Among the new movies that were released Friday, June 6 are a psychological thriller starring Mark Strong and Taissa Farmiga, a sci-fi actioner starring Tom Cruise and Emily Blunt and a romantic dramedy starring Clive Owen and Juliette Binoche.

Mark Strong plays a man with the ability to enter peoples’ memories who takes on the case of a brilliant, troubled 16-year-old girl (Taissa Farmiga) to determine whether she is a sociopath or a victim of trauma. (R – 98 minutes)

It is hard to keep viewers engaged in a movie that takes place primarily within the mind. “Anna” struggles with that task every step of the way, coming across as dull and lifeless while also failing to muster up much originality with its psychological story – the concluding twist of which can be seen coming from about 90 minutes away. Stars Mark Strong and Taissa Farmiga turn in solid albeit subdued performances and the plot points are occasionally compelling but the overall product lacks the necessary energy to keep us on the edge of our seats. (Thumbs Down!)

Tom Cruise plays a soldier fighting in a war with aliens who finds himself caught in a time loop of his last day in the battle, though he becomes better skilled along the way. Emily Blunt also stars. (PG-13 – 113 minutes)

There is no denying that “Edge of Tomorrow” has some spectacular special effects and operates on a slightly higher wavelength than most summer blockbusters. Moreover, its first act is ridiculously compelling. Unfortunately, its final act drops the “compelling” quality and is instead just plain ridiculous – not to mention disappointingly conventional considering the creativity with which the new futuristic flick starts off. Another admirable trait that slowly but surely disappears over the course of its runtime is a sense of humor – which is not only much needed during the “Transformers”-esque finale but also kind of expected anytime Tom Cruise is involved. (Thumbs Down!)

James McAvoy plays a corrupt cop who manipulates and hallucinates his way through a bid to secure a promotion and win back his wife and daughter. (R – 97 minutes)

Witnessing human debauchery on film can be quite amusing – as movies like “The Wolf of Wall Street,” “The Hangover” and even “Jackass” have so hilariously demonstrated. And “Filth” has – as its title warns – more than its fair share of human debauchery. However, what writer/director Jon S. Baird forgets to do is make any of it even remotely funny therefore the new crime comedy does little more than leave a bad taste in your mouth. A decent starting place would be a protagonist who is at least a little bit likeable and a plot that feels less like someone is just flinging feces around. (Thumbs Down!)

Juliette Binoche and Clive Owen play an art instructor and an English teacher, respectively, who form a rivalry that ends up with a competition at their school in which students decide whether words or pictures are more important. (PG-13 – 111 minutes)

While the romantic relationship that “Words and Pictures” tries to paint between its two leads – Juliette Binoche and Clive Owen – is never quite believable, the way that the characters impact one another is genuinely affecting. The new romantic dramedy demonstrates how human interaction improves our lives and that relationships of any and all types are essential to our own advancement. The debate that is at the core of the motion picture’s plot also takes on a life of its own as viewers ponder the value of the written word versus that of visual art. (Thumbs Up!)