Among the new movies that were released Friday, Dec. 19 are a cinematic update of a classic musical, a romantic dramedy starring Justin Long and Emmy Rossum and the final installment in the “Night at the Museum” trilogy. 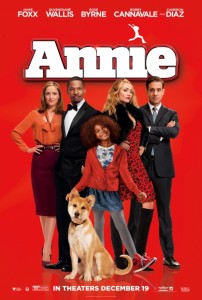 Quvenzhané Wallis plays a foster kid who has had a hard knock life with her mean foster mom (Cameron Diaz). But everything changes when a hard-nosed tycoon and New York mayoral candidate (Jamie Foxx) makes a thinly-veiled campaign move and takes her in. Rose Byrne and Bobby Cannavale also star. (PG – 118 minutes)

The energy of “Annie’s” music and the soul of its story make the new cinematic update of the classic movie musical an endearingly enchanting piece of entertainment for audiences of all ages. Granted, purists – particularly those who grew up watching the 1982 adaptation – will likely initially reject this take and its copious distinctions, but this remains the magically uplifting tale with which we are all familiar therefore even they may have their hearts softened and smiles spread across their faces before all is said… er… sang and done. (Thumbs Up!) 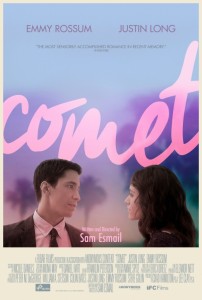 “Comet” desperately wants to be “500 Days of Summer” but it crashes and burns so badly that the viewer almost despises the earlier film simply for planting the seed for this film in writer/director Sam Esmail’s head. Granted, stars Justin Long and Emmy Rossum are amazing actors and, individually, remarkably reflect the various stages of the relationship’s effect on their characters. However, their chemistry just is not there, making the whole film feel feigned. The much larger problem, though, is the jumbled aspect of time, which jumps forward and backward with abandon. It is the romantic dramedy’s defining quality but it also makes viewers’ heads spin faster than Earth itself. (Thumbs Down!)

‘Night at the Museum: Secret of the Tomb’ 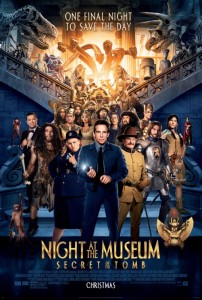 Ben Stiller reprises his role as a museum night watchman who, this time, spans the globe, uniting favorite and new characters while embarking on an epic quest to save the magic before it is gone forever. (PG – 90 minutes)

“Night at the Museum: Secret of the Tomb” is imaginative yet uninspired. In other words, there are plenty of special effects to look at as dinosaur bones, brass snakes and Greek statues come to life in the third – and final – installment of director Shawn Levy’s family-flick franchise but none of it extends beyond superficial eye-candy. Moreover, our hearts remain untouched – unless you count a few coincidentally key lines of dialogue from the late Robin Williams in his final on-screen appearance. The youngest audience members may be mesmerized but most everyone else will fail to feel the magic. (Thumbs Down!)