Among the new movies that were released Friday, Sept. 19 are a nearly silent thriller and a pair of dramedies in which family members reunite at their childhood home. 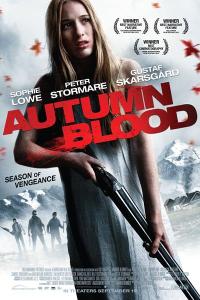 Sophie Lowe plays a self-sufficient young girl who, frightened of being separated from her younger brother by child services following her mother’s death, strives to live off the land in peace. When she is assaulted by a group of hunters led by the son of the man who killed her father, she prepares to take a stand against the ruthless attackers. (R – 100 minutes)

“Autumn Blood” is an astonishingly chilling thriller. Its shivers are made even more soul-penetrating by the fact that it features only a few words of dialogue. Director Markus Blunder, who also co-wrote the screenplay, instead decides to let the movie’s magnificent imagery do the talking. Be it the talented actors’ emphatic facial expressions or the picturesque setting so sublimely captured by cinematographer Reed Morano, this immensely visual experience will magnetize you to the edge of your seat and steal your breath away. It is the rare motion picture that is as poetic as it is enthralling. (Thumbs Up!) 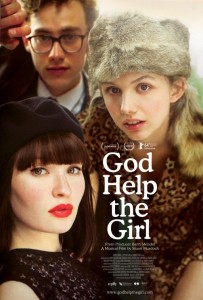 Emily Browning plays a young woman who begins writing songs as a way to sort through some emotional problems and meets two other musicians (Olly Alexander and Hannah Murray) each at crossroads of their own. (NR – 111 minutes)

There are a couple of catchy tunes in the new musical drama “God Help the Girl” but the best one on its soundtrack – the one featured in the film’s trailer not to mention being the one from which the motion picture takes its title – is relegated to a momentary melody. However, that may be the least troublesome part of Belle and Sebastian musician Stuart Murdoch’s directorial debut as the flick frequently meanders into trivial territory – especially when its characters are not singing, which is actually more of a distraction from an otherwise dull experience than something that sincerely serves the story. (Thumbs Down!) 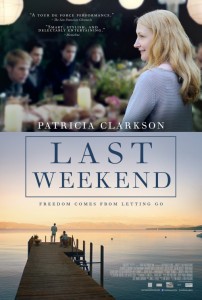 Patricia Clarkson plays a matriarch who asks her adult sons to visit their gorgeous Lake Tahoe home for a final weekend before she sells it. However, it quickly becomes a comical disaster. (NR – 94 minutes)

Star Patricia Clarkson gives an inspired performance in “Last Weekend,” a dramedy that shrewdly tackles the topic of how we are forced to change identities several times over the course of our lives. It is extremely easy to identify with the film’s characters – none more so than Clarkson’s matriarch who, brilliantly delivering writer/co-director Tom Dolby’s poetic dialogue, transitions from a hilariously abrasive nag into a sympathetic empty nester. Dolby humanizes each of the other characters as well, thereby encouraging us to exercise empathy during our next family gathering and making this the perfect prerequisite to Labor Day weekend, Thanksgiving or what have you. (Thumbs Up!) 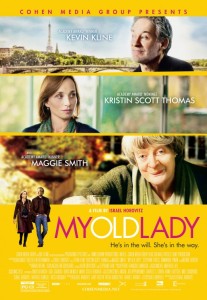 Kevin Kline plays a down-on-his-luck New Yorker who inherits a Parisian apartment from his estranged father but is shocked to discover a live-in tenant (Maggie Smith) who is not prepared to budge. Kristin Scott Thomas also stars. (PG-13 – 107 minutes)

“My Old Lady” is a quietly but quickly captivating dramedy. Adapting his own stage play, writer/director Israel Horovitz has crafted a film that fully utilizes the strengths of its stars – none more so that Kevin Kline, whose character is both charismatically funny and endearingly identifiable. The actor effortlessly brings Horowitz’s cleverly nuanced dialogue to life while simultaneously extracting sympathy for Kristin Scott Thomas’s character, who is not exactly immediately likeable. Maggie Smith, too, shines in a role that essentially acts as the spiritual center of the story, which reminds us to exercise a little empathy during life for there are certain to be situations that we may not accurately understand. (Thumbs Up!)

‘This is Where I Leave You’ 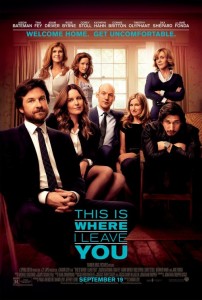 Jason Bateman, Tina Fey, Adam Driver and Corey Stoll play four grown siblings who, when their father passes away, are forced to return to their childhood home and live under the same roof together for a week along with their over-sharing mother and an assortment of spouses, exes and might-have-beens. (R – 103 minutes)

“This is Where I Leave You” feels very familiar. Granted, part of that familiarity is undoubtedly a direct result of the new dramedy’s remarkable resemblance to other films set around funeral-induced reunions like last year’s “August, Osage County” and more notably “The Big Chill.” However, it also comes from its likeable characters (especially the one played by Timothy Olyphant) and their universally empathetic situations. Although any resonance is artificial and therefore short-lived, the entire experience is entertaining and emotionally satisfying enough to make spending time with the dysfunctional Altman family a fun substitute for your own. (Thumbs Up!)