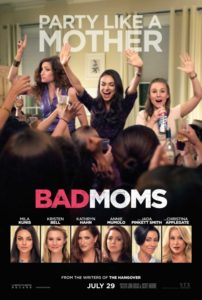 Mila Kunis plays an over-worked, over-committed and exhausted mother who joins forces with two other over-stressed moms (Kathryn Hahn and Kristen Bell) on a quest to liberate themselves from conventional responsibilities – going on a wild, un-mom-like binge of long overdue freedom, fun and self-indulgence putting them on a collision course with the PTA president (Christina Applegate) and her clique of devoted perfect moms (Jada Pinkett Smith and Annie Mumolo). (R – 101 minutes)

“Bad Moms” is so concerned with being “bad” that it forgets to actually be funny. That is to say that the new comedy certainly showcases what would happen if moms were to shed all of their inhibitions but there are very laughs that are produced as a result. There is perhaps some entertainment value in seeing these women go wild, but it is so unrealistic that it loses all levity and therefore ability to authentically amuse much less affect. Kathryn Hahn is certainly the shining star on the cast whereas everyone else’s performance fizzles with mediocrity. (2 Stars)