‘Badly’ amuses, ‘Galaxy’ is out of this world and ‘Words’ resonates 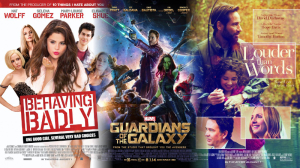 Among the new movies that were released Friday, Aug. 1 are a raunchy comedy starring Selena Gomez, Marvel’s latest superhero cinextravaganza and a drama in which David Duchovny plays a father grieving the loss of his daughter.

Nat Wolff plays a socially awkward high schooler who is willing to do whatever it takes to win the heart of the girl of his dreams – the most beautiful and popular girl at school (Selena Gomez). (R – 98 minutes)

Save for Selena Gomez, whose indifferent performance resembles someone reciting lines for the rehearsal of a high school play, “Behaving Badly” is actually not all that bad – at least when it comes to entertainment value. Granted, writer/director Tim Garrick packs more depraved debauchery into the new comedy than he probably should have – especially during the climax (ahem) when it starts to feel at least a little excessive. But with so many recognizable stars – from Mary-Louise Parker and Elisabeth Shue to Dylan McDermott and even Gary Busey – acting out such sinful situations, you cannot help but have fun. (Thumbs Up!)

‘Guardians of the Galaxy’

Chris Pratt plays a brash adventurer who finds himself the object of an unrelenting bounty hunt after stealing a mysterious orb from a powerful villain with ambitions that threaten the entire universe, forcing him into an uneasy truce with a quartet of disparate misfits. (PG-13 – 121 minutes)

Chris Pratt’s Star Lord, Zoe Saldana’a Gamora, Dave Bautista’s Drax, Bradley Cooper’s Rocket and Vin Diesel’s Groot may save the universe but humor saves “Guardians of the Galaxy.” Er, it doesn’t exactly save it so much as it elevates it to a point at which even non-sci-fi fans will have an absolute blast watching Marvel’s latest superhero cinextravaganza set in the farthest reaches of outer space. Rocket – a computer-generated raccoon that constantly cracking clever quips – is easily the highlight here but the entire property’s playful posture is what makes this such out-of-this-world fun. (Thumbs Up!)

Anna Kendrick plays a woman who, after a breakup, moves in with her sister (Melanie Lynskey). Despite a rocky start, the woman’s influence helps her sister realize that an evolution in her life, career and relationship is necessary for her happiness. (R – 78 minutes)

On the surface of things, writer/director Joe Swanberg made a mistake in calling his new dramedy “Happy Christmas.” Moviegoers who are not fans of Christmas movies – especially ones released in August – will likely steer clear of it while those on the opposite end of said spectrum – such as myself – will be disappointed to find out the holidays hardly play any role in the plot. Things don’t get much brighter once you dig deeper, either, as Swanberg’s mumblecore approach feels less like watching a movie than it does spending time with unlikeable people who accomplish nothing other than rambling on and on about trivial topics. (Thumbs Down!)

David Duchovny and Hope Davis play a couple that, after the unexpected death of their daughter, works to build a state-of-the-art children’s hospital where families are welcomed into the healing process. (PG-13 – 93 minutes)

“Louder Than Words” is a very divided motion picture. The first half, which essentially chronicles how a family deals with the unexpected death of their youngest and most peacemaking member, is tremendously touching as it takes moviegoers on a roller-coaster of emotions. However, the second half morphs into a much more conventional – not to mention stiff – story about said family’s efforts to honor their loved one’s memory. It is – like the family’s efforts – good-intentioned but its execution is way more wooden and therefore less affecting than the preceding scenes. Strong emotional resonance remains nonetheless. (Thumbs Up!)

Romain Duris plays a wealthy, inventive bachelor who endeavors to find a cure for his lover (Audrey Tautou) after she is diagnosed with an unusual illness caused by a flower growing in her lungs. (NR – 94 minutes)

“Mood Indigo’s” visual whimsy is remarkably cute albeit tremendously trippy. You may find it hard to shake the feeling that you have inadvertently ingested some sort of drug upon entry of the movie theater yet you will like the experience nonetheless. However, upon the progression of the plot – or rather the lack thereof – it feels much more like a gimmick employed by writer/director Michel Gondry to distract us from the fact that the film is sort of slim on story. Having said that, its radiant romanticism remains more than enough to win over the hearts of most moviegoers. (Thumbs Up!)