Among the new movies that were released Friday, May 29 are a genre mash-up starring Hailee Steinfeld, a natural disaster flick starring Dwayne Johnson and a cat-and-mouse thriller starring Milla Jovovich and Pierce Brosnan. 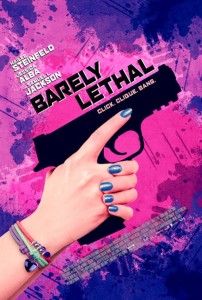 Hailee Steinfeld plays a teenage special ops agent who, yearning for a normal adolescence, fakes her own death, assumes the role of an exchange student and quickly learns that surviving the treacherous waters of a typical American high school can be even more difficult than international espionage. (PG-13 – 100 minutes)

“Barely Lethal” is an entertaining film that, while fun, fails to live up to its full potential. The new action-comedy dips its toes into satirical waters with extremely effective results as it references quintessential high school flicks like “Clueless” and Mean Girls.” However, it eventually falls into the trap of taking itself too seriously, becoming just another one of those movies rather than continuing to comedically deconstruct the typical teenage experience. Still, it walks the genre-blending line well with star Hailee Steinfeld convincingly portraying both a badass and a socially awkward young woman, making the movie a buoyantly amusing mash-up. (Thumbs Up!) 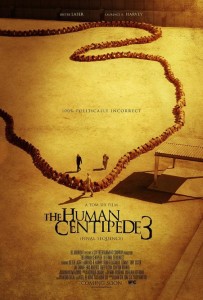 Dieter Laser and Laurence R. Harvey play a prison warden and his right-hand man who, taking inspiration from “The Human Centipede” films, look to create a 500-person human centipede as a solution to their troubled prison’s problems. (NR – 100 minutes)

It probably no longer needs to be said at this point but, just in case anyone accidentally stumbles upon the new threequel, “The Human Centipede III (Final Sequence)” is one of the most revolting things to which you will ever bear witness. Fortunately, deranged writer/director Tom Six increases the comedy and decreases the amount of time spent graphically showcasing twisted surgical procedures from that of his overly obscene second installment. However, the movie remains empty of any value whatsoever and chock full of totally tasteless moments from which – if you have a soul – you will find it necessary to avert your eyes. (Thumbs Down!) 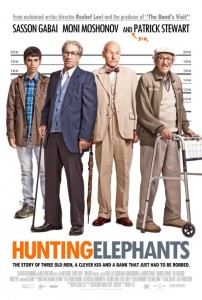 Gil Blank plays a gifted 12-year-old boy who plans a bank robbery with three elderly men (Sasson Gabai, Moni Moshonov and Patrick Stewart) in order to seek revenge on the institution for cheating him after the death of his father. (NR – 107 minutes)

As you might expect, actor Patrick Stewart is the best thing about “Hunting Elephants.” Unfortunately, he plays a relatively small role in the new crime comedy. It is clear that everyone involved knows Stewart is the star. However, the central story is not that of his character. He is simply there to add some much needed color and excitement to an otherwise drab and boring film. Sure, it spouts out the occasionally witty one-liner – most of which are of the senior citizen variety – but its emotions never seem sincere and its plot points are pretty predictable. (Thumbs Down!)

Dwayne Johnson plays a rescue-chopper pilot who, in the aftermath of a massive earthquake in California, makes a dangerous journey across the state in order to rescue his estranged daughter (Alexandra Daddario). (PG-13 – 123 minutes)

“San Andreas” is not a movie. It is a ride – a relentlessly rip-roaring, edge-of-your-seat-and-occasionally-fall-right-off ride. Granted, its track is populated with preposterous plot points and droll dialogue – each line more ludicrous than the last – but these only deepen the diverting nature of the new action-packed thriller, allowing audiences to check life’s annoying anxieties at the door along with their brains and simply have fun. The special effects are astonishing and often cause one’s stomach to drop, constantly inciting an emotional release and making the movie one of the best examples of cinematic escapism in recent years. (Thumbs Up!) 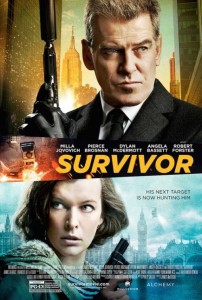 Milla Jovovich plays a Foreign Service Officer who, after being mysteriously framed for a terrorist bombing, must evade government capture and death by a ruthless assassin (Pierce Brosnan) in order to stop the real perpetrators’ master-and much deadlier-plan. (PG-13 – 96 minutes)

“Survivor” is one of those movies that appears to have everything going for it yet remains unable to truly take off and reach its full potential. Its cast includes accomplished action stars Milla Jovovich and Pierce Brosnan, its director is James McTeigue – the man responsible for the riveting “V for Vendetta” – and it features the consistently compelling cat-and-mouse setup on a seemingly respectable budget. Unfortunately, the new thriller’s lack of logic, intelligence or inspiration inhibit viewers’ enjoyment of it as everything feels fairly conventional. Jovovich and Brosnan make the best of it and deliver an occasionally exciting sequence but are ultimately unable to lift the quality above that of your average television police procedural. (Thumbs Down!)