‘Before’ is boring, ‘Point’ is predictable and ‘Woods’ is welcoming

Among the new movies that were released Friday, Sept. 4 are a romantic drama starring and directed by Chris Evans, a sports comedy starring Jeremy Sisto and David Walton and an Appalachian Trail-set dramedy starring Robert Redford and Nick Nolte. 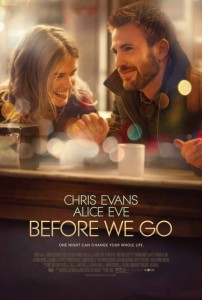 Chris Evans and Alice Eve play strangers stuck in New York City for the night. Starting as convenient acquaintances, the two soon grow into each other’s most trusted confidants when a night of unexpected adventure forces them to confront their fears and take control of their lives. (PG-13 – 89 minutes)

Before you go see Chris Evans’ directorial debut “Before We Go,” you may wish to drink a few cups of coffee. That is because the new romantic drama, a pale reflection of Richard Linklater’s “Before Sunrise” series of films, is an absolute bore from beginning to end. Even though Evans and his co-star Alice Eve are charismatic actors, their characters could not be less captivating. More importantly, their dialogue – which is pretty much all that exists in this loquacious exercise – could not be less interesting, leaving viewers sighing, yawning and checking their watches the entire time. (Thumbs Down!) 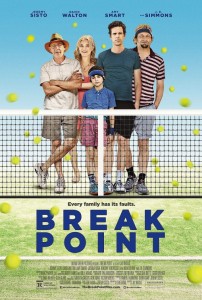 Jeremy Sisto plays a reckless man-child on the last leg of his career as a doubles tennis player who decides to make one last-ditch effort to revive his career, convincing his childhood partner – his estranged brother (David Walton), now an apathetic substitute teacher – to team up with him. The mismatched pair, with the help of a 11-year-old boy (Joshua Rush), make an unlikely run at a grand slam tournament and are forced to re-discover their game and their brotherhood. (R – 90 minutes)

The one and only appeal of “Break Point” is the fact that charismatic star David Walton is, in an indirect way, reprising the role he played on NBC’s brilliant-but-canceled comedy series “About a Boy.” That undesigned connection may be enough to keep audiences interested for at least a little while. But, before long, the new sports comedy’s paint-by-numbers approach becomes a bit too overwhelming with its predictability leaving viewers feeling impassive at best. Jeremy Sisto’s character is extremely annoying, making it somewhat impossible to root for him to succeed, while laughs are almost nonexistent. (Thumbs Down!)

‘A Walk in the Woods’ 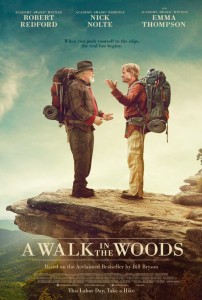 Robert Redford challenges himself to hike the Appalachian Trail with the only person he can find willing to join him on the trek – his long lost and former friend (Nick Nolte) who is now a down-on-his-luck serial philanderer who sees the trip as a way to sneak out of paying some debts and sneak in one last adventure before it is too late. (R – 98 minutes)

So long as you view “A Walk in the Woods” as a casual affair during which you can spend some time with a couple of amiable actors playing characters who are pleasant enough then you will likely enjoy the experience. However, if you are looking for any significant substance, insight or emotion then you will undoubtedly be at least a bit disappointed in the new dramedy. That is to say that there are not exactly any particularly poignant moments in the movie but there are plenty of amusing ones as dynamic stars Robert Redford and Nick Nolte stroll through breathtaking vistas. (Thumbs Up!)