‘Beyond’ hits target, ‘Monkey’ hits sweet spot and ‘Squeeze’ hits hole in one 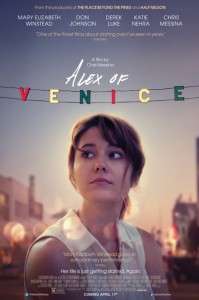 Mary Elizabeth Winstead plays a workaholic attorney who is forced to reinvent her life after her husband (Chris Messina) suddenly leaves. Now faced with the humdrum and sometimes catastrophic events that permeate the fabric of our lives, she discovers both a vulnerability and inner strength she had not yet tapped all while trying to hold together her broken family. (R – 86 minutes)

“Alex of Venice” is an admirable yet aimless movie. The new drama shifts its focus too frequently thereby causing the audience’s attention to drift and ultimately wane. If anyone would have been able to make this meandering material work it would have been star Mary Elizabeth Winstead but, while she is indeed as charismatic and identifiable as usual, the tale still proves to be too untidy. Perhaps that is the point, as it is a reflection of Winstead’s character’s life, but it remains too jumbled to enjoy. Having said that, Don Johnson’s character, performance and story steal the show. (Thumbs Down!) 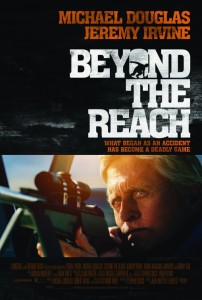 Michael Douglas plays a high-rolling corporate shark who plays a most dangerous game with his impoverished young guide (Jeremy Irvine) during a hunting trip in the Mojave Desert. (R – 90 minutes)

“Beyond the Reach” chronicles one of the most electrifying games of cat-and-mouse in recent cinematic history. The new thriller draws viewers to the edge of their seats, gripping them and refusing to let go for the duration of what turns out to be one hell of a compelling ride. Michael Douglas commands the screen with a flawlessly merciless performance while Jeremy Irvine takes a beating in a very believable way. However, the true star of the film is its unrelenting intensity as it takes us on a trek through the desert that exhausts as much as it exhilarates. (Thumbs Up!) 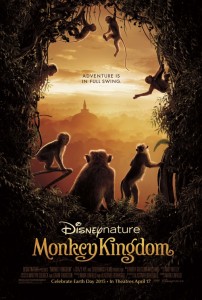 Filmmakers Mark Linfield and Alastair Fothergill follow the struggles of a newborn monkey and its mother as they struggle to survive within the competitive social hierarchy of the Temple Troop, a dynamic group of monkeys who live in ancient ruins found deep in the storied jungles of South Asia. (G – 81 minutes)

“Monkey Kingdom” is an incredibly cute documentary that is guaranteed to engage and enchant audiences of all ages. A pair of scenes that feature the monkeys in human-inhabited settings are especially delightful as is one in which they interact with a dog. However, while the amusement of seeing these silly monkeys monkey around is an indisputable highlight, the sweet story that plays out like one of Disney’s animated masterpieces – complete with memorable characters – is the true attraction. On the spectrum of DisneyNature’s documentaries to date, this achievement swings multiple loops around “Chimpanzee” but “African Cats” continues its reign as the series’ best. (Thumbs Up!)

In the Middle East a new insurgency has begun. At the same time, there has also been a proliferation of monsters in that region. The army decides to draft in more numbers to help deal with this insurgency. (R – 116 minutes)

“Monsters: Dark Continent” is less a sequel than it is a cinematic cousin – a very distant, multiple times removed cinematic cousin – to the 2010 thriller that preceded it. And while the earlier effort blew audiences away with its fresh vision and earned that film’s writer/director Gareth Edwards a seat at the helm of “Godzilla,” writer/director Tom Green’s followup is a tired interpretation of the well-worn war genre. The fact that the fighting takes place on a continent overrun with monsters is simply a sidenote, adding nothing but artistic anecdotes that aggravate more than they stimulate. (Thumbs Down!) 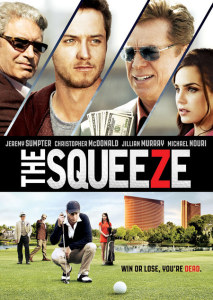 Christopher McDonald plays a notorious gambler who discovers a modest young man (Jeremy Sumpter) in a small rural town with uncommon golf skills. Seeing his potential, the gambler convinces him to abandon his dreams of winning the U.S. Open and start playing in matches where the stakes grow higher and higher until the game becomes life or death. (PG-13 – 95 minutes)

“The Squeeze” could somewhat accurately be described as a golf thriller. Granted, that may sound like an oxymoron but believe it or not writer/director Terry Jastrow has actually found a way to make one of the most sleep-inducing sports genuinely exciting. The new film is still far from a hole-in-one as its story lands in a few sandtraps around the midway point that slow down the movie’s otherwise monopolizing momentum. However, the experience remains extremely engaging as it draws viewers in with an enthusiastic approach to the game and keeps them hooked with some surprisingly suspenseful scenes. (Thumbs Up!)