Among the new movies that were released Friday, June 5 are a faith-based flick featuring Ben Franklin and the third installment in the horror franchise that forever changed our perception of Tiny Tim’s “Tiptoe Through the Tulips.” 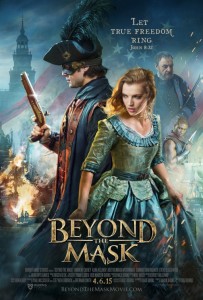 Andrew Cheney plays a British East India Trading Company assassin who seeks to redeem his past by thwarting a plot against a young nation’s hope for freedom. (PG – 100 minutes)

When you take into account the fact that “Beyond the Mask” is a faith-based flick, its scale is certainly impressive, mirroring more of a big-budget blockbuster than the genre’s generally independent roots. Unfortunately, bigger does not always equal better, as is the case with this cluttered effort that may suffer from trying a tad too hard to appeal to all audiences. One’s attention tends to drift more often than not during the movie. Its admirable messages are there but are not concretely relayed therefore feelings fall short of inspiration. The scenes with Ben Franklin are fun but even they are more about novelty than anything. (Thumbs Down!)

Lin Shaye plays a gifted psychic who reluctantly agrees to use her ability to contact the dead in order to help a teenage girl (Stefanie Scott) who has been targeted by a dangerous supernatural entity. (PG-13 – 97 minutes)

“Insidious: Chapter 3” certainly serves up several scares. Unfortunately, though, they are the kind that cause you to jump – which are immediately gratifying but lack any lasting impact. The third installment in the popular horror film franchise is a slight step up from the fright-free second installment yet could not be further from the original’s ingenuity. Star Lin Shaye, committing to her character as though this were an Oscar contender, is outstanding but everything else about the movie is lackluster – from its too-dark-to-see scenes to its tale’s triviality. Its spiritless pace may be the only reason its jump-scares work as well as they do. (Thumbs Down!)