‘Big Bird’ has heart, ‘Pitch Perfect 2’ has humor and ‘Grows’ has hope

Among the new movies that were released Friday, May 15 are a documentary about the man behind a beloved and iconic character, a sing-songy sequel to a 2012 comedy and a dramedy that disproves the beliefs many people possess about Down syndrome and other so-called disabilities. 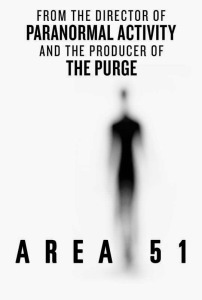 Three young conspiracy theorists attempt to uncover the mysteries of Area 51 – the government’s secret location rumored to have hosted encounters with alien beings. What they find at this hidden facility exposes unimaginable secrets. (R – 95 minutes)

It is obvious to see why “Paranormal Activity” writer/director Oren Peli’s found footage horror flick “Area 51” sat on the shelf for six years before finally being released (and under the radar rather than with any fanfare whatsoever). On the plus side, those whose anticipation has not waned with time are well-equipped with the patience required to arrive at anything that remotely resembles something scary. After an hour and fifteen minutes of annoyingly uneventful exposition, the film’s chaotic finale disappoints in that we do not see anything alien. Moreover, most moviegoers cannot identify with and therefore get frightened from a government facility in the same way that they can a haunted house. (Thumbs Down!) 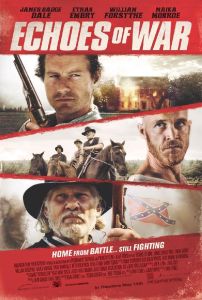 James Badge Dale plays a Civil War veteran who returns home to the quiet countryside only to find himself embroiled in a conflict between his family and the brutish cattle rancher (William Forsythe) harassing them. Ethan Embry and Maika Monroe also star. (R – 100 minutes)

“Echoes of War” is a good example of why one should never trust outward appearances. The new historical drama features vivid cinematography and a promising cast that includes James Badge Dale, William Forsythe, Ethan Embry and Maika Monroe. However, the film is in desperate need of a little life as it moves along at a snail’s pace and puts the viewer to sleep in the process (or lack thereof). Writer/director Kane Senes and co-writer John Chriss do not populate the story with enough substance to warrant its runtime. To make matters worse, the dialogue is wooden and not at all reflective of real Civil War-era life. (Thumbs Down!)

Elizabeth Banks plays a police detective who, 8 years after her failure to save the life of a missing child from the hands of two young girls (Dakota Fanning and Danielle MacDonald), must race the clock to prevent history from repeating itself when another child goes missing in the same town just days after the girls are released from juvenile detention. Diane Lane also stars. (R – 93 minutes)

Directed by documentarian Amy Berg, “Every Secret Thing” boasts a visual style that resembles reality thereby releasing an alarmingly uncomfortable feeling upon its viewer. That feeling is made even more effective by convincing performances from the new thriller’s talented cast of both established actors like Elizabeth Banks and newcomers like Danielle MacDonald. Unfortunately, Berg’s documentary-like approach comes complete with a slower-than-molasses pace that prevents any tension from building. This loose atmosphere along with an eventual dependence on procedural elements subvert the film’s aforementioned attributes and make the movie somewhat boring – a true crime considering its potential. (Thumbs Down!)

‘I Am Big Bird: The Caroll Spinney Story’

Filmmakers Dave LaMattina and Chad N. Walker document the life of the man who has been “Sesame Street’s” Big Bird and Oscar the Grouch since 1969. And at 78 years old, he has no intention of stopping. (NR – 90 minutes)

“I Am Big Bird: The Caroll Spinney Story” has a heart that is every bit as big as the one that you would imagine beats behind the iconic character’s yellow feathered chest. Aside from the sheer fascination factor as filmmakers Dave LaMattina and Chad N. Walker peel back the curtain of a universally beloved piece of our childhood, Caroll Spinney’s story reveals the man’s remarkable creativity and indelible commitment to the character, acting as inspiration for the viewer to live their own life with the same level of passion and – perhaps more importantly – unconditional love. (Thumbs Up!) 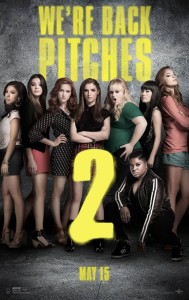 Anna Kendrick reprises her role as a member of the Barden Bellas who, after a humiliating command performance at Lincoln Center, enter an international competition that no American group has never won in order to regain their status and right to perform. (PG-13 – 114 minutes)

“Pitch Perfect 2” is just a bit aca-better than its 2012 predecessor, acknowledging its glee-ful goofiness in the same vein and “Bring It On” rather than consistently taking itself too seriously – a misstep that made the first movie more frustrating than fun. The latter quality is undoubtedly the focal point this time around, even though the sing-songy sequel’s quirks can still occasionally get on a viewer’s nerves. The values surrounding friendship, unity and tradition that it advocates are admirable and fairly affecting but its extremely entertaining enthusiasm is the runaway reason to see it as are the amusing, absurdly performed mashups and medleys. (Thumbs Up!) 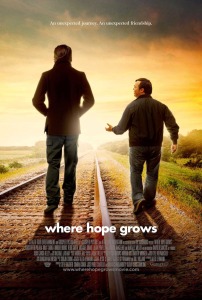 Kristoffer Polaha plays a self-destructive former pro baseball player who is given a serious lesson in living life with courage when he befriends a grocery store clerk with Down syndrome (David DeSanctis). (PG-13 – 95 minutes)

“Where Hope Grows” truly lives up to its title, instilling hope in those that may feel lost or forlorn while warming an awful lot of hearts along the way. The new dramedy does a lot to disprove the beliefs that many people possess about Down syndrome and other so-called disabilities. However, that is only a fraction of the film’s proficiency. Its touching story communicates how human connection – in particular genuine friendship – is the key to not only healing but living a fulfilling and fortuitous life. Newcomer David DeSanctis earns everyone’s sincere admiration while star Kristoffer Polaha accurately characterizes a flawed individual with which we can all identify. (Thumbs Up!)