Among the new movies that were released Friday, June 26 are an actioner about an attempted assassination of the President of the United States, a family adventure about a military dog and a comedy about a foul-mouthed teddy bear. 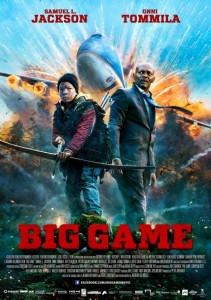 Onni Tommila plays a young boy who, after witnessing a spectacular crash, discovers the escape pod from Air Force One containing the President of the United States (Samuel L. Jackson). When they realize a group of kidnappers is hot on their trail with the intention of taking the president, the unlikely duo must escape their hunters as they search for the American Special Forces team sent out to find them. (PG-13 – 86 minutes)

It is impossible to watch “Big Game” without acknowledging that the new actioner is purposefully preposterous. Writer/director Jalmari Helander, who was responsible for 2010’s delightfully dark fable “Rare Exports: A Christmas Tale,” refuses to reign in his imagination, populating his motion picture with sequences that are laughably ludicrous. However, the viewer’s amusement amplifies with each increasingly outrageous moment. Its comical absurdity only intensifies the exhilaration with star Samuel L. Jackson being the absolute best actor to reflect both tones simultaneously. The flick’s greatest asset, though is Onni Tommila, who also brings a bit of heart and some surprisingly sensible significance to the story. (Thumbs Up!) 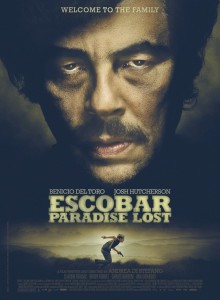 Josh Hutcherson plays a young surfer who falls for the niece of Pablo Escobar (Benicio Del Toro) and finds his life on the line when he is pulled into the dangerous world of the family business. (R – 120 minutes)

“Escobar: Paradise Lost” features a fascinating concept but it fails to fully utilize it. The new thriller takes a fictional story and enrobes it with real history thereby adding an extra element of anxiety to an already intimidating tale. Moreover, stars Josh Hutcherson and Benicio Del Toro turn in commendable performances with the former being the everyday guy with whom we can identify and the latter being a fantastically formidable foe. However, writer/director Andrea Di Stefano rushes through the first act before slamming her foot on the breaks for the second. As a result, true tension is never given a chance to build and disinterest suddenly sets in. (Thumbs Down!)

‘Into the Grizzly Maze’ 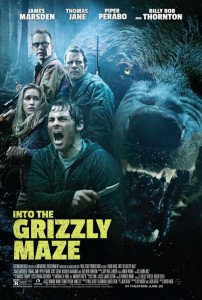 James Marsden and Thomas Jane play estranged brothers who reunite at their childhood home in the Alaskan wild where they must put aside their differences to defend themselves against an unrelenting grizzly bear that has been terrorizing their town. Billy Bob Thornton and Piper Perabo also star. (PG-13 – 100 minutes)

2015 is turning out to be the year of the bear. Writer/director Adam MacDonald brought us “Backcountry,” Seth MacFarlane introduced us to “Ted 2” and now director David Hackl takes us “Into the Grizzly Maze.” Whereas “Backcountry” excelled with suspense and surprise and “Ted 2” is played strictly for laughs, “Into the Grizzly Maze” takes viewers on a rip-roaring roller-coaster ride through the Alaskan wild with the biggest, baddest and most blood-thirsty grizzly bear they have ever seen hot on their tail. It is extremely exciting and enormously entertaining right up to the edge-of-your-seat, armrest-gripping grand finale. (Thumbs Up!) 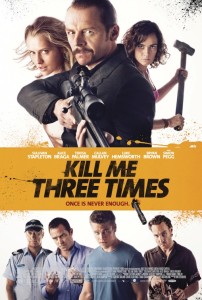 Simon Pegg plays a mercurial assassin who discovers that he is not the only person trying to kill the siren (Alice Braga) of a sun-drenched surfing town and finds himself unraveling three tales of mayhem, murder, blackmail and revenge. Teresa Palmer also stars. (R – 91 minutes)

“Kill Me Three Times” is not only a waste of an extremely talented cast; it is also a waste of viewers’ extremely valuable time. The new crime thriller twists and turns its way around a script that seems to scream “Low-Rent Quentin Tarantino Knock-Off” without ever once presenting anything even remotely original much less interesting enough to grab the audience’s interest. Director Kriv Stenders gets mild props making the movie with as little dialogue as possible but, unfortunately, he is working with a screenplay that simply lacks coherence. As a result, you are left watching with confounded indifference. (Thumbs Down!) 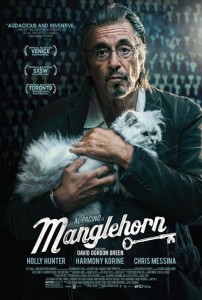 Al Pacino plays a strange and lonely man who tries to come to terms with a past crime that cost him the love of his life. Holly Hunter also stars. (R – 97 minutes)

“Manglehorn” is an excruciatingly languorous, loquacious and capricious character study. Director David Gordon Green’s new drama is easily one of the filmmaker’s worst efforts to date, featuring entirely too much dialogue and not nearly enough character consistency. Star Al Pacino does his best at creating a vivid-albeit-inert character but it is one whose drastic behavioral changes render him unlikeable and even unbelievable. The film’s single saving grace is actress Holly Hunter, whose on-screen charisma prevents viewers from falling asleep but also makes them condemn Pacino’s character even more for his temperamental treatment of her. (Thumbs Down!) 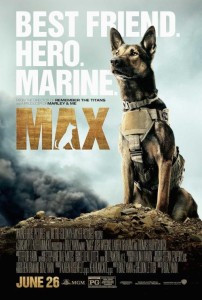 As most movies about dogs do, “Max” is guaranteed to extract its fair share of tears from viewers – including early on when the titular German Shepherd runs up to his handler’s casket and mournfully whines. However, the new family adventure flick’s ability to affect extends far beyond the heartbreaking and heartwarming aspects. It also manages to get its audience all riled up, as it stirs up impassioned anger at its villains and earnest anxiety over the course of its exciting story. In other words, it encourages genuine emotional investment from moviegoers who will, when all is said and done, have a strengthened appreciation for the four-legged heroes in their own lives. (Thumbs Up!) 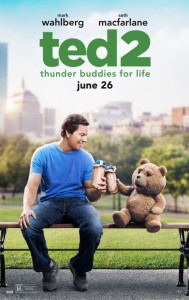 Seth MacFarlane voices a talking teddy bear who must prove he is a person in a court of law in order to qualify to be a parent when he and and his new wife (Jessica Barth) want to have a baby. Mark Wahlberg and Amanda Seyfried also star. (R – 115 minutes)

“Ted 2” certainly possesses the same shockingly distasteful sense of humor as its predecessor and even attempts to raise the bar (or lower it, depending on your particular point of view) with some things that come incredibly close to crossing the line but the novelty element has definitely diminished – if only slightly. The new comedy is undoubtedly funny however not nearly as laugh-out-loud hysterical as its initial entry or writer/director Seth MacFarlane’s previous project “A Million Ways to Die in the West.” Having said that, it more than compensates for that with a surprisingly poignant narrative about civil rights. (Thumbs Up!)