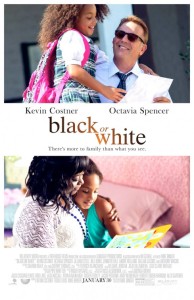 Kevin Costner plays a man who is suddenly left to care for his beloved granddaughter. When the little girl’s paternal grandmother (Octavia Spencer) seeks custody, a legal battle ensues that forces the families to confront their true feelings on race, forgiveness and understanding. (PG-13 – 121 minutes)

“Black or White” overly simplifies everything in its path. This, most glaringly, applies to its emotions as the new dramedy thickly spreads the schmaltz on each and every one of its scenes. However, probably the most problematic of its oversimplification offenses is in its portrayal of African Americans. This is, quite clearly, a white man’s interpretation. Having said that and especially given that aspect, it is commendably brave of the film to avoid taking the “safe” route and instead ask its audience to empathize with star Kevin Costner’s character – frustratingly flawed as he may be. (Thumbs Up!) 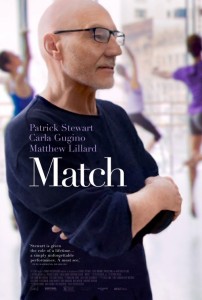 Patrick Stewart plays a Juilliard professor who is interviewed by a woman (Carla Gugino) and her husband (Matthew Lillard) for a dissertation on the history of dance in 1960’s New York. However, it becomes increasingly clear that there are ulterior motives to the couple’s visit. (R – 94 minutes)

Watching “Match” is akin to watching a ball of yarn unravel. At first, the new dramedy’s story strands are drawn tightly around one another. Seeing them slowly loosen, exposing secrets, ulterior motives and – best of all – emotional epiphanies, can be quite compelling with writer/director Stephen Belber’s fable growing more fascinating with each revolution. However, once that ball of yarn is reduced to a smaller size, it unravels faster – with reckless abandon – and its once relatable characters become a bit bizarre in their behavior. And when all is said and done, there is nothing left – the experience being empty, dissatisfying and frankly kind of confusing. (Thumbs Down!) 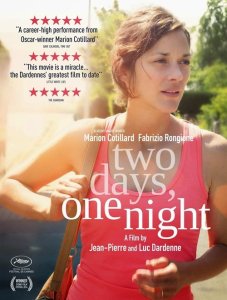 Marion Cotillard plays a woman who, having just been released from the hospital, discovers that her workmates have opted for pay bonuses in exchange for her dismissal. Over one weekend, she must visit each of her colleagues and convince them to sacrifice the extra money so that she can keep her job. (PG-13 – 95 minutes)

Let’s not kid ourselves: “Two Days, One Night” is – in and of itself – less of a movie and more of a showcase for star Marion Cotillard’s acting abilities. Fortunately for the film, said abilities are remarkable, carrying what is otherwise an exceptionally simple story that plays out in a somewhat episodic fashion. That, at least in this case, is not necessarily a bad thing, as we are drawn deeply into Cotillard’s character’s dilemma, intimately following her emotionally exhausting journey and reflecting upon it as though it is our own. (Thumbs Up!)