Among the new movies that were released Friday, Oct. 23 are a western about an unlikely team of gunslingers who set out to rescue settlers who have been kidnapped by a group of cannibal savages and the final installment in the “Paranormal Activity” film franchise. 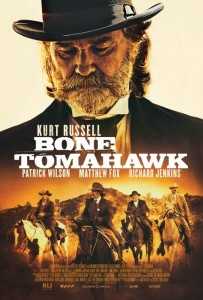 Kurt Russell, Richard Jenkins, Patrick Wilson and Matthew Fox play an unlikely team of gunslingers who set out to rescue settlers who have been kidnapped by a group of cannibal savages. Their enemy is more ruthless than anyone could have imagined, though, putting their mission – and their survival – in serious jeopardy. (NR – 133 minutes)

If one were setting out to rescue someone who had been kidnapped by a group of cannibalistic savages, they would likely do so with at least some sense of urgency. That urgency is precisely what is missing from “Bone Tomahawk,” a new western that sees its characters mosey along the frontier and engage in conversations about how one can read a book in the bathtub while on their way to rescue people who are almost certain to have become someone’s breakfast, lunch and dinner by the time they arrive. The cast is exceptional but the pacing is a real killer, quickly consuming your patience. (Thumbs Down!)

Chris J. Murray plays a father who find tapes of young Katie (Chloe Csengery) and Kristi (Jessica Tyler Brown) being taught supernatural abilities by their grandmother as well as a camera which can see paranormal phenomena that the human eye cannot see. When his daughter (Ivy George) is targeted by supernatural forces, he must find a way to protect her before it is too late. (R – 84 minutes)

“Paranormal Activity: The Ghost Dimension” is easily the best installment in the horror film franchise that began in 2007 and is supposedly now coming to a close. Granted, that may not be saying much given the five previous entries’ tendency to bore more often than thrill. However, this time moviegoers are finally able to see the source of the strange occurrences which, working hand-in-hand with the “Paranormal Activity” brand’s trademark found-footage execution increases the creepiness, retains the audience’s attention and sends the series out with a very loud bang – as well as several quintessential screams. (Thumbs Up!)