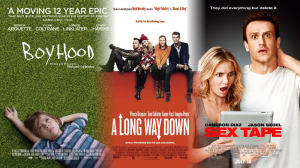 Among the new movies that were released Friday, July 18 are a drama 12 years in the making, an ensemble suicide dramedy and comedy in which Jason Segel and Cameron Diaz make a sex tape.

Following a nuclear apocalypse, nine strangers find themselves clinging to life in a farmhouse cellar and face the nightmare of dwindling supplies, poisonous air and – the greatest threat of all – the hordes of zombie-like refugees who want in. (NR – 92 minutes)

There are only so many ways that post-apocalyptic tales can be told. The survivors are either stuck outside seeking refuge (as remarkably represented in the enormously entertaining “Carriers”) or already holed up in some sort of small space with strangers (as also remarkably represented in the deeply disturbing “The Divide”). “Aftermath” opts for the latter scenario and, absent of anything new to say about it (while also coming across as a low-rent imitation of the aforementioned “The Divide”), viewers are much more likely to choose a slow death by stepping outside into the nuclear wasteland than the even slower death by boredom that is an almost certain side effect of this flick. (Thumbs Down!)

Ellar Coltrane plays a boy/young man who, with his sister (Lorelei Linklater), is taken on an emotional journey through the years – from childhood to adulthood. Patricia Arquette and Ethan Hawke also star. (R – 163 minutes)

Filmed over short periods from 2002 to 2013, “Boyhood” is one of the most unique cinematic experiences to which you will ever bear witness. It is also one of the most moving as you essentially spend 12 years with its characters. Their joys become your joys; their tragedies become your tragedies; and their lives become representative of your own. This transcendent feeling is aggrandized by the amazing authenticity for which writer/director Richard Linklater’s motion pictures (ie. “Before Midnight”) have become known. The truthful beauty that emanates from this movie is guaranteed to leave you absolutely awestruck. (Breakthrough!)

‘Dawn of the Planet of the Apes’

A growing nation of genetically evolved apes is threatened by a band of human survivors of the devastating virus unleashed a decade earlier. They reach a fragile peace – but it proves short-lived as both sides are brought to the brink of a war that will determine who will emerge as Earth’s dominant species. (PG-13 – 130 minutes)

“Dawn of the Planet of the Apes” is a drastically different movie than its 2011 predecessor “Rise of the Planet of the Apes.” Whereas the first film was a feeling fable about man’s relationship with beast, this one is a tension-fueled tale about beast’s perception of said relationship that eventually escalates to an all-out action extravaganza. One thing that they share is a brilliant use of behavior over dialogue to tell their stories and evoke not just excitement but empathy. They are also both among the best – most thought- and emotion-provoking – motion pictures released during their respective summers. (Breakthrough!)

Josh Wiggins plays a motocross and heavy metal obsessed teenager whose increasing delinquent behavior forces CPS to place his little brother with his aunt (Juliette Lewis). He and his emotionally absent father (Aaron Paul) must finally take responsibility for their actions – and for each other. (NR – 98 minutes)

After essentially going from zero to sixty in no-time-flat in “Need for Speed,” star Aaron Paul can’t even get the motor started in “Hellion.” However, it is not the actors fault that new new drama moves along at a snail’s pace as that is how writer/director Kat Candler designed it. And while some may find an appeal in the motion picture’s artistic approach, most moviegoers will simply become impatient as they wait for this melodrama to build up momentum. Unfortunately, it never does and we are left with an independent filmmaker’s measured vision of adolescent delinquency. (Thumbs Down!)

‘A Long Way Down’

Pierce Brosnan, Toni Collette, Imogen Poots and Aaron Paul play four people who meet on New Year’s Eve and form a surrogate family to help one another weather the difficulties of their lives. (R – 96 minutes)

You know that characters are really badly drawn when even charismatic actors like Pierce Brosnan, Toni Collette, Imogen Poots and Aaron Paul cannot make them even the least bit likeable. Having said that, even the most unlikeable characters deserve a lot more dignity than they are given in “A Long Way Down” – a dramedy that nonchalantly uses suicide as a lighthearted plot progression device. Granted, that is pretty appalling but it could have worked if the movie had actually advanced to an emotionally moving conclusion. Unfortunately, the entire ordeal is incredibly innocuous. (Thumbs Down!)

Nicolas Cage plays a reformed criminal who, when his daughter is kidnapped, rounds up his old crew and seeks his own brand of justice. (NR – 92 minutes)

With “Rage,” you get exactly what you expect from a Nicolas Cage movie – a lot of yelling and screaming and… well… rage. The emotion – at an intensity level turned up as far as it can go – seems to be the only one that the actor is capable of portraying nowadays – unless you consider crazy an emotion. But blaming Cage completely would be unfair, especially when director Paco Cabezas appears to be so obsessed with gratuitous violence and stereotypical characters that he forgets the fact that action is not entertaining unless it is accompanied by at least some sort of significance. (Thumbs Down!)

Jason Segel and Cameron Diaz play a married couple who tape themselves trying out every position in “The Joy of Sex” in one 3-hour marathon session only to later discover that their most private video has gone public. (R – 95 minutes)

For a movie with such a scandalous title that is certain to have theaters on alert for auditorium-jumping minors, “Sex Tape” is incredibly innocuous. Granted, the new comedy has a handful of laughs that are relatively raunchy but it runs out of humor about midway through and devolves into your standard sitcom that is – frankly – quite forgettable. Moreover, its tone is tremendously uneven, unsure if it wants to be cartoonishly outlandish or sweetly heartfelt. In other words, it’s OK but there are plenty of better things on which you can blow your wad – of cash. (Get your mind out of the gutter.) (Thumbs Down!)