Among the new movies that were released Friday, May 8 are a drama set in a small town in North Dakota, a comedy centered around a high school reunion and a coming-of-middle-age dramedy that develops on the beach. 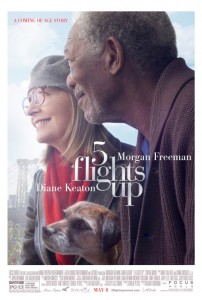 Morgan Freeman and Diane Keaton play a long-time married couple who, having spent their lives together in the same New York apartment, become overwhelmed by personal and real estate-related issues when they plan to move away. (PG-13 – 92 minutes)

“5 Flights Up” is an odd little film that juggles several story elements – all of which are enigmatically absorbing despite feeling as though they are ultimately trivial. That is to say that the new drama makes for some enjoyable entertainment in the moment but lacks end-of-the-day gravity aside from a simple week-in-the-life sentiment. Fortunately, that impression – although featherweight – is emotionally rich. Some of the aforementioned story elements are stronger than others (a dog falling ill vs. the hunt for a suspected terrorist) while the essentiality of each one is debateable but the dynamic between stars Morgan Freeman and Diane Keaton is definitively delightful. (Thumbs Up!) 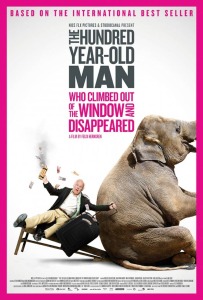 Robert Gustafsson plays a 100-year-old man who, after living a long and colorful life, finds himself stuck in a nursing home and decides to leap out a window and begin an unexpected journey. (R – 114 minutes)

“The 100-Year-Old Man Who Climbed Out the Window and Disappeared” can be easily divided into two halves – one vividly entertaining and the other drably boring. The entertaining half of the new film, which is based on the internationally best-selling novel by Jonas Jonasson, takes place in the present as our senior-yet-spry protagonist embarks on a constantly unpredictable adventure during which he picks up a few new friends – and a boat-load of cash. The boring half takes place in the past as we learn a little bit about said protagonist’s background – none of which seems to be even the least bit relevant to his current and far more colorful undertaking. (Thumbs Down!) 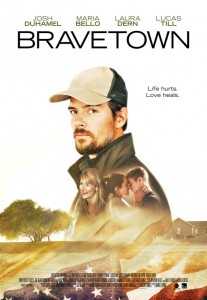 Lucas Till plays a hardened New York City teen from a broken home who is sentenced to counseling for a minor drug infraction along with an extended stay with his estranged father, who lives in a small town in North Dakota. When he is asked to help out the last-place dance team as they vie for the state competition title, his rough exterior begins to soften. (R – 112 minutes)

“Bravetown” is a mishmash of several storylines that feel as though they were lifted from other films and pieced together like the world’s weirdest jigsaw puzzle. Worst of all, some of said storylines fail to make any substantial sense and/or never quite receive a proper conclusion. Having said that, it is difficult to dislike the new drama as its heart is in the right place and its cast is composed of mostly amiable actors with Kherington Payne being the sole exception due to her forced and feigned performance. Unfortunately, the emotional takeaway is too light to nullify the movie’s many imperfections. (Thumbs Down!) 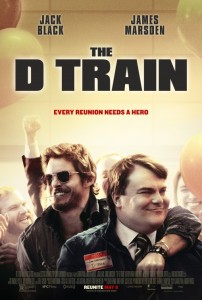 Jack Black plays a man who travels from Pittsburgh to Los Angeles to convince the most popular guy from his high school (James Marsden), who is now the face of a national Banana Boat ad campaign, to show up with him to their class reunion. But he gets more than he bargains for as his former classmate proceeds to take over his home, career and entire life. (R – 97 minutes)

Add “The D Train” to Jack Black’s long list of cinematic trainwrecks in which he plays a character so exasperatingly annoying that you have homicidal thoughts as a result of being forced to spend an hour and a half with him. Unfortunately, Black’s character is not the only one who gets on your nerves during the new comedy. In fact, Kathryn Hahn portrays the movie’s only character who is even remotely deserving of our empathy while everyone else comes across as a mean-spirited stereotype whose actions and behaviors run completely contrary to real-life. Worst of all, though, are the film’s offensively feigned emotions. (Thumbs Down!) 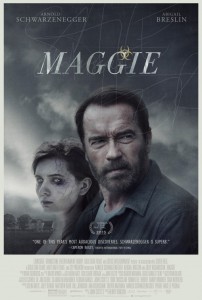 Arnold Schwarzenegger plays a father who, when a deadly zombie virus sweeps the nation, will stop at nothing to save his infected daughter (Abigail Breslin). (PG-13 – 95 minutes)

Casting Arnold Schwarzenegger in “Maggie” is about as useful as if Stephen Hawking had been cast in “Furious 7.” Schwarzenegger’s participation in the project encourages one to have a certain expectation of action. However, the new dramatic horror flick features so little action that you can almost hear the actor’s muscles deteriorating during the plot’s tortoiselike trek from beginning to end. The movie is much more a drama than it is a horror, blending the zombie genre with a disease-of-the-week Lifetime film. It is an intriguing concoction but, unfortunately, is done no favors by its out-of-their-depth cast – not to mention its placid pace and near-nil lighting. (Thumbs Down!) 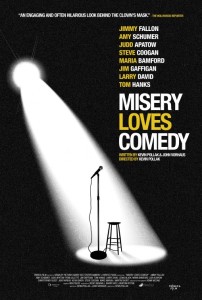 Filmmaker Kevin Pollak chronicles comedians sharing life and professional journeys and insights in an effort to shed light on the thesis: Do you have to be miserable to be funny? (NR – 95 minutes)

Think back to your high school English class and you may remember your teacher giving you the following advice before you began to write any given essay: Organize your thoughts before you put pen to paper. The same rule applies to a feature film – especially a documentary. Filmmaker Kevin Pollak forgot to follow that essential step when setting out to make “Misery Loves Comedy.” Granted, he has got a thesis, which is right there in the title, but his ideas are all over the place, making the new motion picture a cluttered collection of talking heads. Pollak somehow managed to make more than 60 comedians not only unfunny but boring as well. (Thumbs Down!)

Chris Evans plays a man who, while pretending to be a philanthropist at a charity dinner, meets the woman of his dreams (Michelle Monaghan) who happens to be already engaged. They embark on a platonic relationship that is put to the test when they begin to realize they may have feelings for one another. (R – 94 minutes)

“Playing It Cool” appears to think a bit too highly of itself but if you can look beyond that pretentiousness then you are likely to find an entertaining and perceptive romantic comedy. The new flick’s unusually large ego is somewhat justifiable in that it points out all of the shamelessly uninventive rom-com cliches it either directly hits or narrowly misses along the path of its plot. Although astute and often amusing, this observant approach can also occasionally annoy. On the other hand, its insight into real relationship anxieties and expectations is quite clever, resonating with viewers’ own thoughts and behaviors in and out of love. Moreover, stars Chris Evans and Michelle Monaghan are charming while their many supporting actors are a lot of fun. (Thumbs Up!) 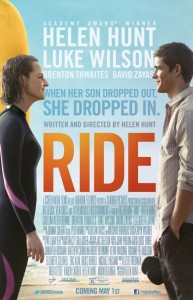 Helen Hunt plays a New York City magazine editor who follows her son (Brenton Thwaites) to Los Angeles after he drops out of college to surf and find himself and ends up being the one thrust into a sea change of self-discovery. (R – 93 minutes)

As a romantic and coming-of-middle-age dramedy, “Ride” hangs ten, being both enjoyable to watch and emotionally perceptive. As a mother/son relationship dramedy, however, it wipes out. Writer/director/star Helen Hunt’s incessant bickering with Brenton Thwaites is instantly nerve-grating and their unique bond is a bit too bizarre to carry any sincere sentimental significance. Fortunately, that subplot often takes a backseat to Hunt’s character’s solo struggle and seeing her attempt to tackle a new skill – surfing – that runs contrary to her intellectual nature is as entertaining as it is resonant while her interactions with co-star Luke Wilson are quite charming. (Thumbs Up!)

Kristen Wiig plays a woman with Borderline Personality Disorder who wins the lottery, quits her psychiatric meds and buys her own talk show on which she broadcasts her dirty laundry as both a form of exhibitionism and a platform to share her peculiar views on everything from nutrition to relationships to neutering pets. (R – 87 minutes)

“Welcome to Me” is mildly amusing but that really is the full extent of its value. The new comedy fails to extract any poignant significance from the silly story that it puts on display. The film follows in the footsteps of “The Truman Show” and “EDtv” with respect to its theme but, unlike those two brilliantly perceptive projects, it does not strive to be anything more than diverting entertainment in the same vein as a sketch on star Kristen Wiig’s former mainstay “Saturday Night Live.” Wiig is gratifyingly goofy and her long list of co-stars makes for never a dull moment but it is a shame that such a fruitful concept falls so flat in insight. (Thumbs Down!)