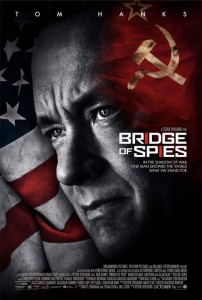 Tom Hanks plays an American attorney tasked with negotiating the release of a U-2 spy plane pilot who was shot down over Russia at the height of the Cold War. (PG-13 – 135 minutes)

“Bridge of Spies” is an astutely absorbing motion picture. Director Steven Spielberg’s new movie can easily be divided into two halves – the first being a fascinating legal drama and the second being a suspenseful enemy-territory-set thriller. Both halves are distinctly different but equally compelling as they provide a history lesson that is as intelligent as it is entertaining. Although Tom Hanks is the bankable star who rises to the occasion by embodying the perfect balance of anxiety and audacity during said second half, it is Mark Rylance who immediately steals the show in a film that is as challenging as it is rewarding. (Thumbs Up!) 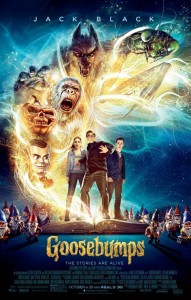 Dylan Minnette plays a teenager who meets the daughter (Odeya Rush) of author R. L. Stine (Jack Black). When he unintentionally unleashes the monsters from their manuscripts, they begin to terrorize the town and it is suddenly up to the trio to get all of them back in the books where they belong. (PG – 103 minutes)

“Goosebumps” moves along at a chaotically fast pace, providing monstrous amusement for audiences of all ages. The new family-friendly fright-fest hits the ground running as it desperately attempts to pack as many of R.L. Stine’s creepy creations from the author’s popular book series into a single story as possible, much to the delight of fans who grew up reading said source material. Star Jack Black may not have been the ideal choice to portray Stine as he comes across as more abrasive than bizarre, but the fun fusion of humor and horror remains excessively entertaining. (Thumbs Up!) 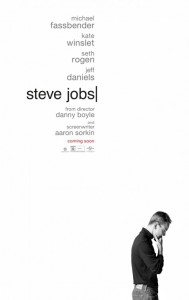 Michael Fassbender plays the brilliant man at the epicenter of three iconic product launches, ending in 1998 with the unveiling of the iMac. Kate Winslet, Seth Rogen and Jeff Daniels also star. (R – 122 minutes)

Much like screenwriter Aaron Sorkin’s “Moneyball” made moviegoers who were not sports aficionados yawn, “Steve Jobs” will likely be a chore to sit through for moviegoers who are not computer savvy. After all, the new biopic is essentially a three-act set piece populated with dialogue that will make even Apple Genius’ heads spin. Said dialogue is incredibly quick-witted, though, and even viewers who are unable to keep up with the hyperactive carousel that evolves before their eyes will be find the film fascinating. Star Michael Fassbender is great in the title role but it is his co-star Kate Winslet who may be most deserving of recognition come year’s end. (Thumbs Up!) 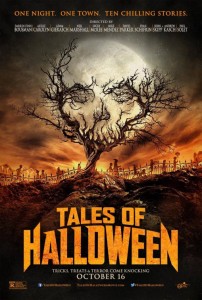 Ten stories are woven together by their shared theme of Halloween night in an American suburb, where ghouls, imps, aliens and axe murderers appear for one night only to terrorize unsuspecting residents. (NR – 92 minutes)

“Tales of Halloween” very well may be the best horror anthology of all time. The new movie, which is a collection of 10 vignettes directed by different filmmakers, succeeds where so many others have failed because of its thematic and systemic cohesion. Each story stands on its own as a devilishly delightful Halloween fairy tale while also giving subtle nods to one another. Darren Lynn Bousman’s “The Night Billy Raised Hell” is the best of the bunch but Dave Parker’s “Sweet Tooth” and Neil Marshall’s “Bad Seed” are also clear winners in a Halloween haul that is full of tricks and treats and certain to become a holiday tradition. (Breakthrough!) 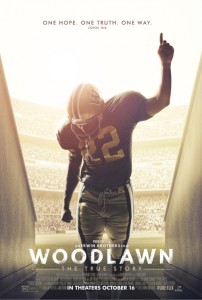 Nic Bishop plays a high school football coach who, in 1973, leads his team – fueled by its dedication to love and unity in a school filled with racism and hate – to make an astounding run at the playoffs. (PG – 123 minutes)

Andrew and Jon Erwin have become quite the reliable filmmakers, having delivered to viewers the life-affirming “October Baby” and the exceptionally entertaining “Mom’s Night Out.” However, that winning streak encounters its first speed-bump with their latest project “Woodlawn.” The new sports drama is edited together like a 2-hour trailer, boasting epic Christian music, heavy-handed speeches and other manipulation techniques that try too hard to sell moviegoers on a story for which they have already purchased a ticket. Its motivations and messages are admirable but its execution is excessive and exhausting. As a result, the movie is unable to make it to even the 10-yard line before fumbling. (Thumbs Down!)