‘Brooklyn’ is poetic, ‘Coopers’ is poignant and ‘All American’ is hopeful

Among the new movies that were released Friday, Nov. 13 is period drama set in 1950s America, a Christmas-themed ensemble dramedy and a football flick from the writer of “Rudy” and “Hoosiers.” 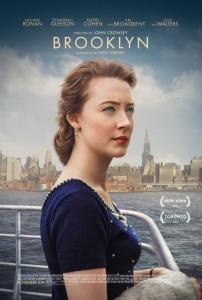 Saoirse Ronan plays a young Irish immigrant who, lured by the promise of 1950s America, departs Ireland and the comfort of her mother’s home for the shores of New York City. The initial shackles of homesickness quickly diminish as a fresh romance sweeps her into the intoxicating charm of love. But soon, her new vivacity is disrupted by her past and she must choose between two countries and the lives that exist within. (PG-13 – 111 minutes)

“Brooklyn” is classic and emotionally nuanced storytelling at its very best. The new period drama is both beautiful to look at as its tale is enjoyable to experience. Its romance extends far beyond star Saoirse Ronan’s character’s courtship, also emanating from her view of the city and what it represents. Ronan gives a grand performance as does her co-star Emory Cohen, creating an old-fashioned piece of filmmaking that engages mind, heart and soul from beginning to end. This is truly one of the most poetic motion pictures of 2015, affecting and satisfying on several levels. (Thumbs Up!) 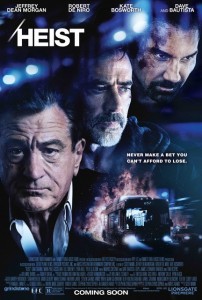 Jeffrey Dean Morgan plays a father who, without the means to pay for his daughter’s medical treatment, partners with a greedy co-worker (Dave Bautista) to rob a casino owned by a feared gangster (Robert De Niro). When things go awry, they are forced to hijack a city bus. (R – 90 minutes)

“Heist” is the kind of movie that frustrates you time and time again due to its incredibly implausible plot points that lie around each and every corner. The first few absurdities may make you want to scream at the screen. But before long, the action overwhelms your sense of reason and you simply go along for the exceptionally entertaining ride. Not since “Speed” have moviegoers had this much fun on a bus. Gina Carano continues to exhibit a complete lack of acting abilities but, aside from that, stars Jeffrey Dean Morgan, Dave Bautista and Robert De Niro deliver non-stop excitement that will have your heart pumping vigorously and your brain on vacation. (Thumbs Up!) 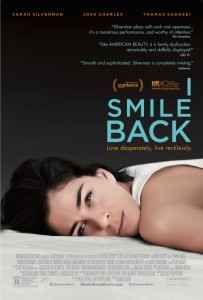 Sarah Silverman plays a married woman with kids who takes the drugs she wants, sleeps with the men she wants and disappears when she wants. With the destruction of her family looming and temptation everywhere, she makes one last desperate attempt at redemption. (R – 85 minutes)

“I Smile Back” is a deeply depressing drama, showcasing a fine performance from star Sarah Silverman and a tragic tale of a woman unable to escape a cycle of poor choices and behaviors. The new movie demonstrates that Silverman is more than just a comedian; she is also a tremendously talented actress who brings authentic life to a magnificently melancholy character. Her portrayal is particularly tough to watch since she spirals the drain over and over again but it is a story of supreme significance and one that will hold you completely captive. (Thumbs Up!) 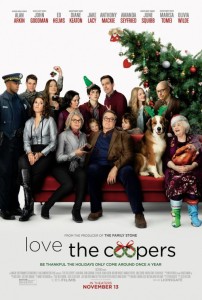 Four generations of extended family come together for their annual Christmas Eve celebration. As the evening unfolds, a series of unexpected visitors and unlikely events turn the night upside down, leading them all toward a surprising rediscovery of family bonds and the spirit of the holiday. (PG-13 – 106 minutes)

“Love the Coopers” culminates with some very touching sentiments that will likely resonate with and bring a tear to the eyes of moviegoers who cannot help but become nostalgic this time of the year. After all, the new ensemble Christmas dramedy makes some very poignant observations about how the holidays trigger emotional remembrances of celebrations past. Unfortunately, a lot of what leads up to said sentimental scenes consists of annoying bickering, contrived melodrama and boorish grand gestures. Nonetheless, commemorating the season’s significance with the tremendously talented cast whose stories reflect our own remains relatively enjoyable. (Thumbs Up!) 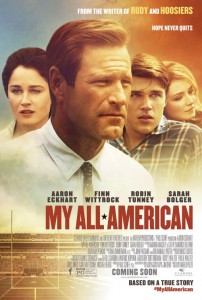 Finn Wittrock plays an underdog on the gridiron who faces the toughest challenge of his life after leading his team to a championship season. Aaron Eckhart, Sarah Bolger and Robin Tunney also star. (PG – 118 minutes)

“My All American” will not only make you stand up and cheer; it will also rejuvenate your hope. The new football flick from the writer of “Rudy” and “Hoosiers” is much more about the human spirit than it is about the sport. Granted, there are plenty of scenes set on the field that will energize genre fans but it is the story’s heart that will resonate with most moviegoers – and make them a crying wreck as they walk out of the theater. It is a charmingly old fashioned and extremely emotional movie that encourages you to never ever give up. (Thumbs Up!)