Among the new movies that were released Friday, Feb. 5 are a star-studded comedy from Joel and Ethan Coen, a legal thriller in which Josh Duhamel finds himself caught in between Anthony Hopkins and Al Pacino and a thriller that has Ethan Hawke investigating an unspeakable crime. 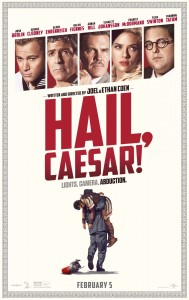 “Hail, Caesar!” is sporadically amusing and features a tremendously talented cast but the sum of its parts is less than spectacular. In fact, an awful lot of the new comedy from Joel and Ethan Coen is downright dull. Many of its jokes just fall flat while others have their sights set so squarely on Hollywood insiders that they fly right over the heads of general audiences. Some scenes are a gold as the golden era itself – such as one in which Channing Tatum sings and dances in a sailor suit – but said moments are few and far between. (2 Stars) 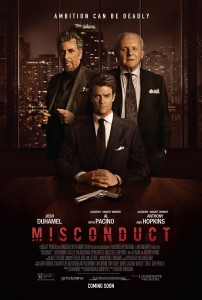 Josh Duhamel plays an ambitious lawyer who finds himself caught in a power struggle between a corrupt pharmaceutical executive (Anthony Hopkins) and his firm’s senior partner (Al Pacino). When the case takes a deadly turn, he must race to uncover the truth before he loses everything. (R – 106 minutes)

Due to its ludicrous plot developments and dramatic twists, “Misconduct” is almost fun to watch on a guilty pleasure level. After all, the new legal thriller draws you in with some stylish cinematography as well as a top-notch cast that includes Josh Duhamel, Anthony Hopkins and Al Pacino – and that’s just the headliners. But about halfway through, the story starts racing ahead of itself; key scenes are seemingly skipped over and the narrative begins jumping in several different directions. What was once entertaining is suddenly completely preposterous and difficult to follow. (2 Stars) 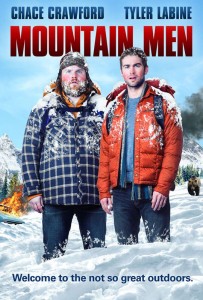 Tyler Labine and Chace Crawford play estranged brothers who journey to a remote family cabin in the mountains. Buried resentment and bruised egos soon derail the plan and when the smoke clears they’ve destroyed their car and burned down the cabin. With their very survival at stake, they must learn to work together to get back to civilization. (NR – 90 minutes)

“Mountain Men” entices viewers to accompany its characters on their trek up to a snowy hilltop with the promise of goofy laughs and the potential for emotional resonance. But then it strands them there with dull drama and annoying arguments. Its abrupt tonal fluctuations make caring about its characters exceptionally difficult. You cannot laugh at them because they truly are in grave danger and you cannot empathize with them because they were never that likeable in the first place. The fact that its resolution is as light as a feather is the final nail in its coffin. (1 Star) 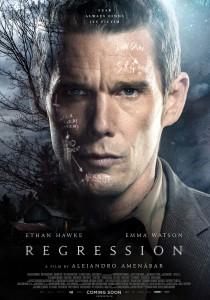 Ethan Hawke plays a detective investigating the case of a young girl (Emma Watson) who accuses her father (David Dencik) of an unspeakable crime. When said father unexpectedly and without recollection admits guilt, a renowned psychologist (David Thewlis) is brought in to help him relive his memories. What they discover unmasks a horrifying nationwide mystery. (R – 106 minutes)

“Regression” is a preposterous thriller masquerading as a hard-hitting drama. As a result, genuine emotion is exchanged for eye-rolling with the flick quickly revealing its true colors as something that lacks any real relevance whatsoever. The seriousness with which it presents itself is not only unsubstantiated but also offensive. To make matters worse, it is over-acted and treated by its typically talented cast like a melodrama. Meanwhile, the story spins its wheels and chases its own tail for too long, putting viewers to sleep and preventing them from caring about the conclusion once it finally rolls around. (1 Star)