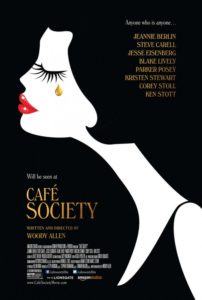 Jesse Eisenberg plays a young Bronx native who, in the 1930’s, moves to Hollywood where he falls in love with the secretary (Kristen Stewart) of his powerful uncle (Steve Carell), an agent to the stars. After returning to New York he is swept up in the vibrant world of high society nightclub life. Blake Lively also stars. (PG-13 – 85 minutes)

“Cafe Society” harkens back to both a time of golden romanticism and a time when Woody Allen movies were actually worth seeing. The new dramedy is one of the writer/director’s best projects in years as it delivers breathtakingly beautiful set pieces and some exceptionally snappy dialogue. Allen has infused his script with a vast number of clever lines that are certain to be quotable for years to come. A tremendously talented ensemble cast and a “sadistically comical” love story make for a golden-era-like motion picture that is amusing as it is affecting. (4 Stars)