Among the new movies that were released Friday, Jan. 22 is a drama aiming to stop human trafficking. 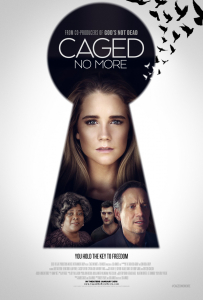 Loretta Devine plays a grandmother who discovers that her two granddaughters have been kidnapped by their sinister father (Kevin Sorbo) and taken overseas to be sold into slavery to settle his drug debt. She enlists the help of the girls’ uncle (Sorbo) and his son (Alan Powell) who will stop at nothing to see them safely returned home. (PG-13 – 90 minutes)

“Caged No More” is thrilling, emotional and most of all meaningful. The new drama addresses the very disturbing – and very real – subject of human trafficking in such a way that simultaneously entertains and incites action. It is impossible to exit the movie theater without feeling driven to do something about the tragic topic that inspired the story. Star Alan Powell is captivating as our protagonist while co-star Kevin Sorbo impresses with dual roles that exist on polar-opposite ends of the character spectrum. The final act will cause you to cling to your seat with suspense, leaving an impact that lingers long after the end credits have rolled. (3 Stars)