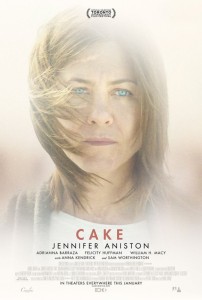 Jennifer Aniston plays a woman who, suffering from chronic pain, initiates a dubious relationship with a widower (Sam Worthington) while having hallucinations about his dead wife (Anna Kendrick). (R – 98 minutes)

“Cake” has a tendency to kind of just flounder around, leaving viewers stumped as to not only what is going on but especially what is being said about it. After all, we are thrown into this story about a woman who is significantly unlikeable without any backstory. Director Daniel Barnz and screenwriter Patrick Tobin do not give us much to go on either in terms of hints until way late in the game. However a little patience pays off as understanding and empathy eventually wash over you. Until then, a drastically different and praise-worthy performance from star Jennifer Aniston and several surprise co-stars/cameos keep the journey engaging. (Thumbs Up!)

Al Pacino plays an over-the-hill stage actor who struggles to find his passion for life again. Near his breaking point, he finds motivation in the form of a young and lustful lesbian (Greta Gerwig). But as their relationship heats up, he has a hard time keeping up with her. (R – 102 minutes)

“The Humbling” operates on a clever concept and features some extremely fruitful ideas. However, the new dramedy’s potential get muddled along the way as cloudy vagueness rolls in, its characters fail to exude any likeability (much less relatability) and bewildering dialogue weighs down almost every scene. Star Al Pacino gives a good albeit bewildering performance that is consistently amusing – especially during moments set at a veterinarian’s office – but by the end it remains unclear as to what viewers are to take away from their time with him. Add in the nerve-grating Greta Gerwig and the experience is simply not worth one’s time, effort or patience. (Thumbs Down!) 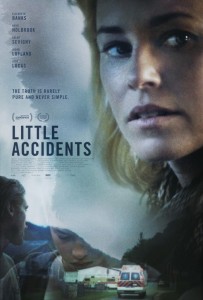 In a small American town still living in the shadow of a terrible coal mine accident, the disappearance of a teenage boy draws together a surviving miner, the lonely wife of a mine executive and a local boy in a web of secrets. Stars include Elizabeth Banks and Josh Lucas. (NR – 105 minutes)

“Little Accidents” could have easily become an absolute bore as its story features few big moments, instead slowly sweeping over viewers with penetrating drama. Even a project with the best of intentions can fall by the wayside with such an approach if the proper conditions are not achieved. Fortunately, writer/director Sara Colangelo successfully executes an authentic therefore captivating atmosphere in the film. The stark setting is the true star here, although a talented cast that includes Elizabeth Banks and Josh Lucas certainly give it a run for its money portraying people whose crises are real, relatable and worthy of our sincere empathy. (Thumbs Up!) 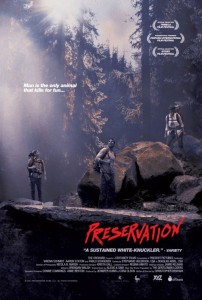 Wrenn Schmidt plays a woman who heads out of town to hunt in a closed nature preserve with her husband (Aaron Staton) and his brother (Pablo Schreiber). Soon the trio is threatened by an unseen menace and the hunters become the hunted as a camping trip in the woods turns into a contest for survival. (NR – 90 minutes)

“Preservation” is a frustrating film. Horror flicks usually have a handful of instances where a character does not properly finish off an attacker during a rare moment of vulnerability or run fast/far enough when their back in turned but the new thriller is chock-full of them. If it were the least bit tongue-in-cheek, as in “You’re Next,” this would make for a lot of fun as you yell and scream at the screen. Here, however, solemnity is the cardinal quality so you can only hold your forehead in your hand with chagrin. Because of this, while it is somewhat thrilling, it never becomes truly engaging. (Thumbs Down!)

Anne Hathaway plays a young woman who, when her musician brother (Ben Rosenfield) is injured and hospitalized in a coma following a car accident, returns home after a long estrangement and begins to use his notebook as a guide to how his life has evolved in her absence. (PG-13 – 86 minutes)

“Song One’s” melody is seemingly sweet and vaguely intriguing. However, its lyrics do not possess much meaning. That is to say the new drama travels along a path that, while promising, is ultimately cluttered and incoherent. Even the movie’s music is a bit odd and off-putting, likely appealing only to fans of indie folk. But it is the plot taking place in between each number that is particularly problematic as it is never quite clear what writer/director Kate Barker-Froyland is trying to say with this story. The romance is underwhelming while the restorative themes are undefined. (Thumbs Down!) 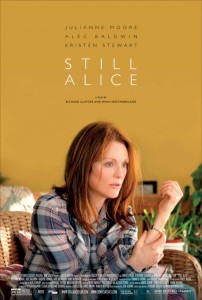 Julianne Moore plays a renowned linguistics professor who starts to forget words. When she receives a diagnosis of Early-Onset Alzheimer’s Disease, she and her family find their bonds thoroughly tested. (PG-13 – 99 minutes)

Julianne Moore gives an absolutely absorbing performance in “Still Alice,” flawlessly capturing each and every stage of her character’s tragic descent into Early-Onset Alzheimer’s Disease. It is a tricky task as one wrong note can result in either oversentimentality or – even worse – insincerity, but the talented actress tackles it in such a way that realistically reflects the complexity of her character’s condition. As a result, our heartstrings are lightly-yet-competently tugged, bringing us to empathetic tears along the way. It can be argued that the ending is somewhat dissatisfying but it, too, possesses true emotional value. (Thumbs Up!)