‘Calling’ compels, ‘November Man’ fizzles and ‘One I Love’ devolves 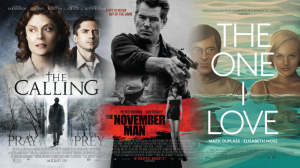 Among the new movies that were released Friday, Aug. 29 are a thriller starring Susan Sarandon, a spy flick featuring Pierce Brosnan and a relationship drama with a sci-fi twist.

Susan Sarandon plays a detective who has not had much to worry about in her sleepy town of Fort Dundas until a string of gruesome murders in the surrounding countryside brings her face to face with a serial killer driven by a higher calling. (R – 108 minutes)

“The Calling” may at first feel like “Fargo’s” younger, grislier cousin but it eventually finds its footing as a legitimately provocative thriller of its own ilk. Its above-average cast – including Susan Sarandon, Topher Grace and Gil Bellows – paired with the intriguing faith-based motivations of its antagonist help to keep audiences engaged in what could have otherwise been considered just a big-screen version of “Criminal Minds.” The final act becomes a bit convoluted but the road to that destination is quite compelling as the detectives piece together an exceptionally bizarre puzzle using victims’ mouths. (Thumbs Up!)

Jon Favreau plays a chef who, having quit his job at a prominent restaurant after refusing to compromise his creative integrity for its controlling owner (Dustin Hoffman), teams up with his ex-wife (Sofia Vergara), his friend (John Leguizamo) and his son to launch a food truck. (R – 115 minutes)

“Chef” is a charming little feel-good comedy that is absolutely impossible to watch on an empty stomach. And even if you walk into the theater feeling full, you will walk out with painful cravings for Cuban and grilled cheese sandwiches. Moreover, the movie’s tale is just as tasty, inspiring its viewers to live a life about which they are extremely passionate and to savor each and every second of each and every day. Complete with a cast that includes Dustin Hoffman, Sofia Vergara, John Leguizamo, Bobby Cannavale, Scarlett Johansson, Oliver Platt and Robert Downey Jr., writer/director/star Jon Favreau has cooked up something delicioso. (Thumbs Up!)

Robin Wright plays an aging, out-of-work actress who accepts one last job – though the consequences of her decision affect her in ways she didn’t consider. (NR – 122 minutes)

“The Congress” has a lot of intriguing ideas. Too many, as it turns out, because the end-result is a messy amalgamation of philosophical concepts and social commentaries that will only occasionally amuse while way too often confuse and therefore drive disinterest. Granted, star Robin Wright gives a commendable performance here – both in live-action and animated form – and those who would like to experience what a trip induced by a marijuana-acid hybrid might look like will surely get something out of this arthouse sci-fi flick. However, most will be left with little more than an itch on the top of their head. (Thumbs Down!)

Domhnall Gleeson plays a young wannabe musician who discovers that he has bitten off more than he can chew when he joins an eccentric pop band led by the mysterious and enigmatic character (Michael Fassbender). (R – 95 minutes)

Thanks to the fact that one of its main characters sports a large papier mâché mask on his head, “Frank” is a film that will repel most moviegoers right off the bat while appealing to a curious few. Unfortunately, the new dramedy is too quirky… no… weird for its own good and that aforementioned curiosity is killed off quite quickly. Domhnall Gleeson’s colorless character being positioned as the motion picture’s protagonist instead of Michael Fassbender’s mental-illness-plagued man for which the movie is titled only makes matters worse, as does a slow pace that takes entirely too long to go anywhere. And don’t even get me started on the abominable music. (Thumbs Down!)

John Hawkes and Mos Def play common criminals who get more than they bargained for upon kidnapping the wife (Jennifer Aniston) of a corrupt real-estate developer (Tim Robbins) who shows no interest in paying the $1 million dollar ransom for her safe return. Will Forte and Isla Fisher also star. (R – 94 minutes)

“Life of Crime” is undeniably amusing – especially during its setup as its kooky characters trip over one another and themselves to pull off a kidnapping or keep certain secrets. However, as time goes on, viewers become just as impatient waiting for something – anything – to happen in the new comedy as its kidnappers do waiting for someone – anyone – to discover their crime. A distinct lack of tension does not help matters much, nor does the fact that its twists play out in dialogue rather than actual action. Still, it’s talented cast, dark demeanor and sheer unpredictability make it a passable piece of entertainment. (Thumbs Up!)

Pierce Brosnan plays an ex-CIA operative who is brought back in on a very personal mission and finds himself pitted against his former pupil in a deadly game involving high level CIA officials and the Russian president-elect. (R – 108 minutes)

“The November Man” is exciting enough in the moment but it is an instantly forgettable entry in the CIA thriller genre and hugely overshadowed by the far superior “Jack Ryan: Shadow Recruit” which, released earlier this year, is still fresh in our memories. While it is nice to see former James Bond Pierce Brosnan back in super-spy mode, his character is underdeveloped and therefore a little unlikeable as he downs alcohol hand over fist and spends plays games with a guy who is merely following orders instead of targeting the true antagonist. And to top it all off, when the plot points are not predictable, they are perplexing. (Thumbs Down!)

Mark Duplass and Elisabeth Moss play a couple that, struggling with a marriage on the brink of falling apart, escapes for a weekend in pursuit of their better selves only to discover an unusual dilemma that awaits them. (R – 91 minutes)

“The One I Love” initially operates on an intriguing premise – one that carries plenty of potential for complex contemplation about relationships. Unfortunately, it never digs deep enough and instead evolves into some strange and shallow exercise in science-fiction that very well could have already been done by “The Twilight Zone,” “The Outer Limits” or what-have-you. Worst of all, it concludes with far too many loose ends and key questions unanswered. On the other hand, its theme of how we change and what we expect from the ones we love – although only lightly touched upon – is compelling. (Thumbs Down!)