‘Central Intelligence’ is dumb, ‘Clown’ is creepy and ‘Dory’ is memorable

Among the new movies that were released Friday, June 17 are a comedy starring Dwayne Johnson and Kevin Hart, a horror flick feeding off coulrophobia and a sequel to one of the most beloved animated adventures of this generation.

Dwayne Johnson plays a one-time bullied geek who grew up to be a lethal CIA agent that comes home for his high school reunion. Claiming to be on a top-secret case, he enlists the help of a former “big man on campus” turned accountant (Kevin Hart). Shoot-outs, double-crosses and espionage ensue. (PG-13 – 114 minutes)

It is perhaps ironic that “Central Intelligence” lacks any intelligence whatsoever – much less originality. The new comedy is essentially a slightly modified version of just about every other movie starring Kevin Hart. For some, that may sound like an appealing thing but for many others it is an annoying thing. Hart’s co-star Dwayne Johnson manages to raise the flick above “Ride Along” levels of stupidity but there is only so much that he can do with what is essentially a one-joke plot. Aside from a computer-generated younger (and fatter) version of Johnson and a handful of amusing cameos, there is very little to recommend here. (2 Stars) 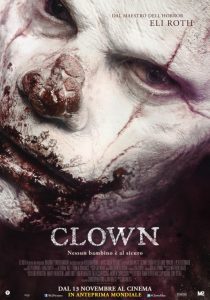 Andy Powers plays a father who finds a clown suit and decides to wear it for his son’s birthday party. However, he soon discovers that the suit turns the wearer into a killing machine. (R – 99 minutes)

“Clown” is far more effective in its first half as it carefully treads the thin line between bizarre and berserk than it does in the second half when it falls on the latter side of said line The new comedic horror flick begins with a fun self-awareness that allows it to be both a bit scary and wildly funny at the same time. These fun moments are reminiscent of R.L. Stine’s “Goosebumps” property – albeit with a far more adult approach. However, the deeper writer/director Jon Watts slides down the rabbit hole, the darker, more violent and less fun the events become. (3 Stars) 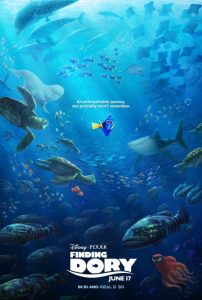 Ellen DeGeneres voices a friendly-but-forgetful blue tang fish who sets out on a mission to reunite with her loved ones and learns a few things about the real meaning of family along the way. (PG – 100 minutes)

Perhaps it is because expectations were too high with “Finding Nemo” remaining one of Pixar’s greatest animated achievements but “Finding Dory” disappoints in that it is just great instead of spectacular. Having said that, the new sequel is still pretty special as it touches the hearts of viewers of all ages with a tale about the true definition of family, living with disability and – most emotionally resonant of all – accepting that unforeseeable events that happen over the course of one’s lifetime and not set-in-stone plans are the true path to happiness. Moreover, it is terrifically fun with an exciting story and lovable characters. In a word, it’s memorable. (4 Stars)