Among the new movies that were released Friday, March 6 are a sci-fi actioner about a titanium gangsta’, a dramatic thriller about mind control and a comedy about a routine business trip that goes off the rails.

‘Bad Asses on the Bayou’ 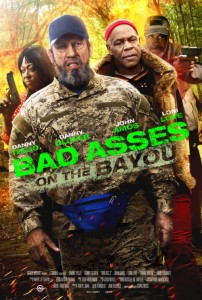 Danny Trejo and Danny Glover reprise their roles as seniors who, this time, travel to Louisiana to attend the wedding of their friend (Loni Love). However, when she is kidnapped, they bring a bit of their viral vigilantism to the Bayou. (R – 85 minutes)

“Bad Asses on the Bayou,” the second sequel to 2012’s “Bad Ass,” is merely more of the same albeit in a different setting. And, frankly, that is enough. Much like its two predecessors, the new actioner is a check-your-brain-at-the-door affair that is only interested in entertaining its viewers. If assessed solely on that aim, the movie more than hits its target as stars Danny Trejo and Danny Glover dole out clever quips and plenty of punches to unsavory characters who are half their age. It is shamefully predictable and a final quarter shootout sequence set to rap music will encourage a lot of eye rolling, but you’ll still be grinnin’ like a possum eatin’ a sweet tater. (Thumbs Up!) 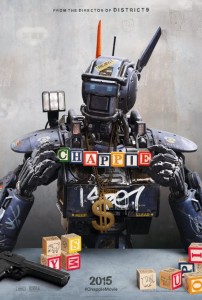 In the near future, crime is patrolled by an oppressive mechanized police force. When one police droid is stolen and given new programming, he becomes the first robot with the ability to think and feel for himself. (R – 114 minutes)

“Chappie” is as intellectually stimulating as it is materially entertaining. Thanks to a wonderfully charming title character, the new science-fiction flick will appeal to audiences far beyond the genre’s immediate fans. But that is not to say that it shies away from presenting a plethora of thought-provoking ideas. In fact, writer/director Neill Blomkamp’s new film dives deep into the conversation of consciousness, except it does so in a groundedly human way fueled by genuine emotion. Blomkamp’s trademark landscapes, an underlying sense of humor and some spectacularly special-effects-driven action sequence only further cement the movie’s achievement on multiple levels. (Thumbs Up!) 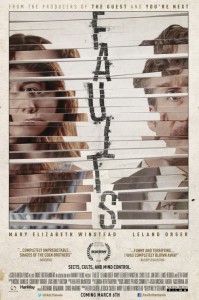 Mary Elizabeth Winstead plays a woman who is under the grip of a mysterious new cult. Desperate to be reunited with their daughter, her parents recruit one of the world’s foremost experts on mind control (Leland Orser). (NR – 89 minutes)

“Faults” is a magnetic movie thanks to its intriguing narrative about mind control but made even more so as a result of the peculiar performances of its two leads Mary Elizabeth Winstead and Leland Orser. Both of the dramatic thriller’s new stars have remarkable range that they exhibit over the course of the increasingly stimulating story. It hooks viewers early on with an oddballish and black sense of humor and keeps them captive throughout the unfolding of its many mysteries. It is a testament to the talent of not only writer/director Riley Stearns but also Winstead and Orser that such an intricately complex parable works this well. (Thumbs Up!) 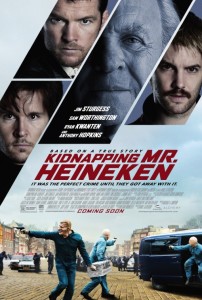 Sam Worthington and Jim Sturgess play childhood friends who, in 1983, pull off the crime of the century – kidnapping one of the richest men in the world, the heir of the Heineken beer empire (Anthony Hopkins), resulting in the largest ransom ever paid for an individual. (R – 95 minutes)

In order to enjoy “Kidnapping Mr. Heineken,” you may have to pair it with a six-pack. That way, you will either be too buzzed to notice the new crime drama’s lack of electricity or have an excuse for why you fell asleep mid-movie. It is quite an accomplishment for a film that recounts the planning, execution and aftermath of a real kidnapping to bore its viewers – especially one with a cast that includes Sam Worthington, Jim Sturgess and Anthony Hopkins – but director Daniel Alfredson’s project manages to do precisely that. However, Hopkins does give quite a captivating performance in the motion picture. (Thumbs Down!) 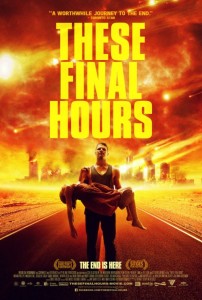 Nathan Phillips plays a troubled man who, desperate to join his girlfriend at the “party to end all parties” and numb any feelings as the world comes to an end, saves the life of a young girl (Angourie Rice) frantically searching for her father. Together they discover how they would truly like to spend their last moments on Earth in this world gone mad. (NR – 86 minutes)

The end of the world appears to be all the rage these days. At least it is when it comes to the entertainment industry. So, in order to stand out from the crowd, an apocalyptic drama has got to do something truly original. Unfortunately, while “These Final Hours” accomplishes an impressive feat on a meager budget, it simply is too much of the same and, as a result, is swallowed up by its bigger-budgeted brethren. It asks some provocative questions and it is artistically sound as an independent film but the world that it is ending is generic and ultimately uninteresting. (Thumbs Down!) 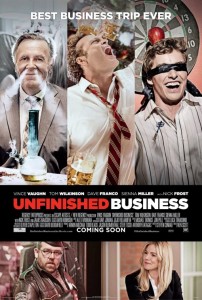 Vince Vaughn plays a hard-working small business owner who travels to Europe with his two associates (Tom Wilkinson and Dave Franco) to close the most important deal of their lives. But what began as a routine business trip goes off the rails in every imaginable – and unimaginable – way, including unplanned stops at a massive sex fetish event and a global economic summit. (R – 90 minutes)

“Unfinished Business” feels a bit, well, unfinished – both as a whole and in individual parts. That is to say that some scenes fall flat and feel incomplete while the entire film lacks an existential rationale. The story is thin and the entire project appears to exist solely as a vehicle to deliver its gags. Fortunately, most – although not all – of said gags work, leaving viewers in stitches every step of the way and sufficiently distracting them to the new comedy’s eventual emptiness. Dave Franco steals the show with an emperlatine performance that is simply flügelschlagen. (Thumbs Up!)