Among the new movies that were released Friday, Oct. 2 are a holiday-set horror anthology, a German-language thriller and a cinematic recreation of Philippe Petit’s walk across a wire strung between the World Trade Center towers. 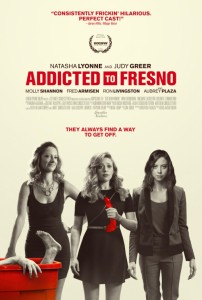 Judy Greer plays a woman who is fresh out of sex rehab when her younger, overly optimistic lesbian sister (Natasha Lyonne) lands her a job as a maid at a local hotel. When the sex addict jeopardizes her fresh start by accidentally killing a hotel guest after a post-rehab relapse, her sister goes to great lengths to help her cover up the crime. (R – 85 minutes)

“Addicted to Fresno” would likely have been a good film if it had more focus. The new comedy stumbles out of the gate by not giving viewers sufficient backstory into its characters lives. This causes some confusion but that quickly fades once said characters begin attempting to hide the body of the man they have just accidentally killed. The movie is then momentarily amusing but veers into different directions that have less to do with the dead guy than the two unlikeable characters’ erratic escapades. The final nail in the flick’s coffin is the anticlimactic, emotionless ending. (Thumbs Down!) 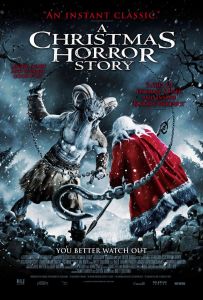 As three friends explore the site of a Christmas Eve massacre, a malevolent spirit is determined to keep them there forever. Meanwhile, one of the first cops to the scene of the murders has new complications as his son exhibits terrifying and violent behavior. And when a local family seeks reconciliation with an estranged aunt, they suddenly find themselves running in terror from Krampus, the demonic anti-Santa Claus. Not even St. Nick is immune to the terror as he fights a horde of zombie elves. (NR – 99 minutes)

It is difficult to determine whether “A Christmas Horror Story” is a perfectly timed Halloween treat or an extra early Christmas gift. Either way, it is wickedly good. The new Christmas-themed horror flick features four stories that are interwoven with one another, occurring simultaneously yet separately. Two of said stories are somewhat generic, with their primary connection to Christmas being timing. However, the other two tales – one tackling the Krampus legend and the other seeing Santa fight a horde of zombie elves – are as festive as they are frightening. And the killer clever ending will have you smiling like a kid on Christmas morning… or Halloween night… whichever holiday fills your trick or treat stocking. (Thumbs Up!) 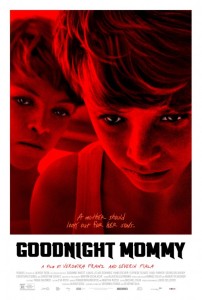 Lukas and Elias Schwarz play twin brothers who, in the heat of the summer in a lonesome house in the countryside between woods and corn fields, are waiting for their mother (Susanne Wuest). When she comes home, bandaged after cosmetic surgery, nothing is like before and the boys start to doubt that this woman is actually their mother. (R – 99 minutes)

“Goodnight Mommy” is one of those movies that you appreciate exponentially more once it is over. There are two reasons for this. First of all, while the new German-language horror flick functions primarily on tension and suspense, it also features a few incredibly brutal scenes that may make some moviegoers avert their eyes. But more notably, its ending leaves you psychologically shocked and emotionally distraught. Writers/directors Severin Fiala and Veronika Franz increase the creepy intrigue by minimizing their use of dialogue and drawing out ominous imagery instead. (Thumbs Up!) 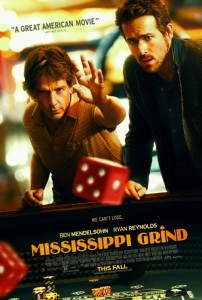 Ben Mendelsohn plays a talented poker player who meets a charismatic young traveler (Ryan Reynolds) and convinces him that they should hit the road together. As they gamble their way down South toward a legendary high-stakes poker game in New Orleans, the trip’s highs and lows unveil the duo’s true character and motivation. (R – 108 minutes)

“Mississippi Grind” is less about its characters than the atmosphere that surrounds them. That is a shame considering said characters are played by a pair of truly talented actors – Ben Mendelsohn and Ryan Reynolds. Said stars do their best to bring life to their otherwise stereotypical roles that seemed to have been tailor-made for them but the story simply does not give them enough material to chew on, resigning itself to soaking up the sights and sounds of its settings. Its methodical pace is another problem, making it exceptionally easy for viewers to lose interest and fall fast asleep. You would be better off betting your $10 in a game of craps than spending it on a ticket to see this. (Thumbs Down!)

Joseph Gordon-Levitt plays a young dreamer who aspires to achieve the impossible – an illegal wire walk in the immense void between the World Trade Center towers. With little more than nerve and blind ambition, he overcomes daunting physical obstacles, betrayals, countless close calls and overwhelming odds to beat the system and execute his mad plan. (PG – 123 minutes)

“The Walk” is one of the most visually stirring movies you will ever witness. The inspired imagery flourishes right from the start, as writer/director Robert Zemeckis uses colors, angles and other optical fireworks to introduce audiences to the unique way that Philippe Petit sees the world. But, of course, that is just the beginning as Zemeckis eventually takes viewers to hair-raising heights. And while the wire-walking is the cinematic centerpiece, the taut suspense in the scenes during which Petit and his “accomplices” set the stage is the most engrossing element of it. Moreover, star Joseph Gordon-Levitt gives what may be not only the year’s best performance but also the greatest acting achievement of his career. (Thumbs Up!)