Among the new movies that were released Friday, May 6 is the latest sequel in the Marvel superhero universe and an ensemble drama arriving just in time for Mother’s Day. 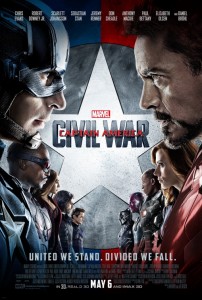 Chris Evans reprises his role as Captain America who, after another incident involving the Avengers results in collateral damage, desires for the superheroes to remain free to defend humanity without government interference while Iron Man (Robert Downey, Jr.) supports government oversight and accountability. (146 minutes)

On some extremely superficial level, “Captain America: Civil War” succeeds in what it sets out to do. After all, the new sequel is essentially just an excuse to pit two competing camps of superheroes against one another. The battle sequence at the center of it all is one of the grandest spectacles seen yet in a Marvel movie. But that is only one scene in a film that is otherwise overlong and overpopulated with characters. Paul Rudd’s Ant-Man, with a welcome wit that is a relief from so much self-seriousness, remains the high point in a sea of increasingly insipid superheroes. (3 Stars) 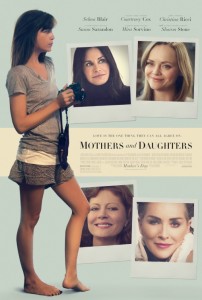 Selma Blair plays a rock photographer who is riding a career high when an unlikely and unexpected pregnancy forces her to turn her lens inward. As she slowly comes to terms with what it might mean to change her life forever, she discovers with fresh eyes her own relationship with her estranged mother. Courteney Cox, Christina Ricci, Susan Sarandon, Mira Sorvino and Sharon Stone also star. (PG-13 – 90 minutes)

So long as you go in understanding that “Mothers and Daughters” is more a series of insightful dialogues than it is a conventional narrative, you are likely to emerge satisfied and perhaps even a little emotionally enlightened. The thing that makes director Paul Duddridge’s new ensemble drama work is its exceptionally talented cast. Viewers become genuinely invested in each of these women’s stories because the sincerity of the actresses’ performances. Having said that, some viewers may become frustrated, finding the back-and-forth between the characters to be a bit on the monotonous side. (3 Stars)