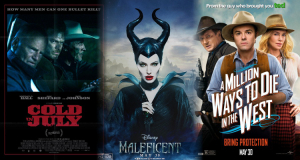 Among the new movies that were released Friday, May 30 are a thriller starring Michael C. Hall, a fresh take on a Disney classic and a comedy set in the Old West.

Michael C. Hall plays a Texan who, initially hailed as a hero for fatally shooting a low-life burglar who broke into his house, begins to fear for his family’s safety when the victim’s ex-con father (Sam Shepard) turns up in town making some not-so-veiled threats. (NR – 109 minutes)

The first 30 minutes of “Cold in July” is exceptionally gripping, fusing the home invasion and revenge genres into one compelling concoction. However, just when things are at their utmost intensity, a wrench is thrown into the tale and the story suddenly shifts into a completely different direction. Although this narrative 180 is interesting in theory and the movie’s mood digs its way under your skin, it feels somewhat forced in that one may find it hard to believe that these characters – particularly the one that Michael C. Hall so excellently portrays – would go along for the risky ride. (Thumbs Down!)

Marion Cotillard plays an immigrant who falls prey to a charming but wicked man (Joaquin Phoenix) who takes her in and forces her into prostitution. The arrival of a dashing stage magician (Jeremy Renner) restores her self-belief and hopes for a brighter future while becoming her only chance to escape the nightmare in which she finds herself. (R – 120 minutes)

Period dramas tend to walk a very fine line between Academy Award-worthy fare and stagey melodrama. “The Immigrant” falls on the latter side of that line barely even one-quarter of the way into its 2-hour runtime. Granted, everything looks beautiful (though pales in comparison to last year’s “The Great Gatsby”) and its cast is incredible (boasting the likes of Marion Cotillard, Joaquin Phoenix and Jeremy Renner) but its story is dull and depressing while its characters are wooden stereotypes that we have seen countless times before in better movies. (Thumbs Down!)

Pierce Brosnan and Emma Thompson play a divorced couple who, after their pension is stolen by an unscrupulous businessman, reunite to steal it back. (PG-13 – 95 minutes)

“The Love Punch” is just one “Benny Hill” theme away from absolute absurdity. The new comedic caper is occasionally kind of charming thanks to its charismatic cast but it is much more often outrageous and outlandish as its characters trip over one another (and themselves) yet still manage to save the day while rekindling their relationship. It is so constantly kooky that it is cringe-inducing – a quality that is amplified by the fact that stars Pierce Brosnan and Emma Thompson deserve a whole lot better than this incessant silliness. (Thumbs Down!)

Angelina Jolie plays a vindictive fairy who is driven to curse a princess (Elle Fanning) only to realize the child may be the only one who can restore peace. (PG – 97 minutes)

Angelina Jolie’s take on “Sleeping Beauty’s” nefarious villain is every bit as epic as Dustin Hoffman’s turn as the title character in “Hook” or when Glenn Close brought Cruella de Vil to life in “101 Dalmatians.” However, as a movie, “Maleficent” is far less magnificent. The story – told from the perspective of the title antihero – is too thin and seemingly exists solely as a means to evolve the ending into a “Frozen”-esque message about girl-power (which may not sit so well with purists). Moreover, the entire experience is a bit bizarre. (Thumbs Down!)

‘A Million Ways to Die in the West’

Seth MacFarlane plays a cowardly farmer who begins to fall for the mysterious new woman in town (Charlize Theron) and must put his new-found courage to the test when her husband – a notorious gunslinger (Liam Neeson) – announces his arrival. (R – 116 minutes)

Watching “A Million Ways to Die in the West” is like spending a couple of hours in the best gosh-darn Western-themed amusement park this side of the Mississippi. That is to say that writer/director (and now star) Seth MacFarlane’s new comedy may be one of the most fun experiences you have in a movie theater this summer as it slays you with nonstop hilarity. Granted, MacFarlane aims his pistol pretty low but he hits his target every time, succeeding at making not only an uproarious laugh-fest but also a competent – albeit contemporarily spoken – Western as well. (Thumbs Up!)

Emma Roberts plays a young woman who is torn between an illicit flirtation with her soccer coach (James Franco) and an unrequited crush on a sweet stoner (Jack Kilmer). (R – 98 minutes)

“Palo Alto” plays out in such a way that suggests James Franco – who not only appears in the new drama but also wrote the collection of stories on which this motion picture was based – aspired to accommodate just about every annoyingly trivial reason a teenager could possibly have for feeling as though their life is one big ball of suffering. Writer/director Gia Coppola’s vision is competent if not derivative but the complete lack of focus and frivolous nature of it all make for one exceptionally boring exercise in ensemble insanity. (Thumbs Down!)