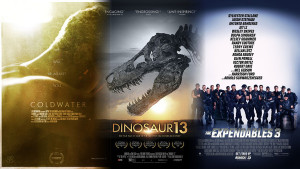 Among the new movies that were released Friday, Aug. 15 are a drama set at a juvenile reform facility, a documentary about a bunch of dinosaur bones and the third installment in Sylvester Stallone’s all-star action franchise.

P.J. Boudousqué plays a young man who is sent to a juvenile reform facility in the wilderness. As we learn about the tragic events that sent him there, his struggle becomes one for survival with the inmates, counselors and the retired war colonel (James C. Burns) in charge. (NR – 104 minutes)

“Coldwater” is a well-acted, tension-filled and harrowingly haunting motion picture. By dropping moviegoers smack-dab in the middle of the story rather than starting off with any exposition, writer/director Vincent Grashaw and co-writer Mark Penney essentially do to them exactly what is done to their lead character – kidnap them and keep them captive. This results in an almost claustrophobic experience, ratcheting up the already alarming atmosphere that leaves nerves frayed. And at the end of the day, it incites thought and debate – two things that too few films are daring enough to do. (Thumbs Up!)

One of the signs of a good documentary is when viewers feel their blood slowly heat up to an eventual rolling boil. “Dinosaur 13” does exactly that. The new motion picture prompts viewers to become vehemently angry at the man who used underhanded tactics to make himself a millionaire (Maurice Williams), the judge who railroaded a group of paleontologists out of silly insecurity (Richard Battey) and the federal government that – as usual – disregarded the lives it destroyed during its petty political power-thrusting. Filmmaker Todd Douglas Miller keeps us engrossed, engaged and even a little moved by a story that in the beginning appears to be about a bunch of bones but is ultimately unveiled to be about a whole lot more. (Thumbs Up!)

Sylvester Stallone reprises his role as a mercenary who, this time around, augments his team with new blood for a personal battle – to take down the Expendables co-founder and notorious arms trader (Mel Gibson) who is hell-bent on wiping out him and every single one of his associates. (PG-13 – 126 minutes)

After two installments of brawny and brainless bangs, blasts and blowups, Sylvester Stallone’s all-star action franchise finally gets a win with “The Expendables 3.” Although the addition of younger cast members – most of whom are athletes instead of actual actors – is a misstep of mediocrity, newcomers Wesley Snipes, Kelsey Grammer, Harrison Ford and especially Antonio Banderas raise the entertainment value while the story seems – for the first time – somewhat well-thought-out and unafraid to slow down every once in a while. In other words, we were always amused but now we are genuinely invested in the rip-roaring ride. (Thumbs Up!)