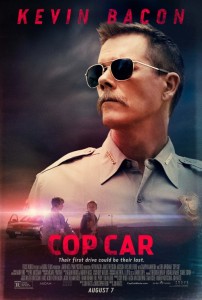 James Freedson-Jackson and Hays Wellford play good-natured but rebellious young boys who stumble across an abandoned cop car hidden in a secluded glade and decide to take it for a quick joyride. Their bad decision unleashes the ire of the county sheriff (Kevin Bacon) and leads to brutal consequences. (R – 86 minutes)

“Cop Car” is overflowing with agonizing suspense and uninhibited thrills. It perhaps pushes viewers’ buttons with greater efficacy than any other movie released this year. Writer/director Jon Watts skillfully stimulates our senses with a thriller that feels as though it was mined from the 1970’s, employing a minimalist approach and balancing stealthy anxiety with blatant excitement. Star Kevin Bacon delivers one of the best performances of his career as a conspicuously corrupt cop. The flick may come to a close too quickly with a climax that could have been a bit more creative but instant gratification cinema does not get much better than this. (Thumbs Up!) 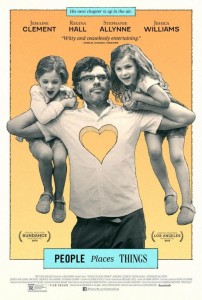 Jemaine Clement plays a newly single graphic novelist who balances parenting his young twin daughters and a classroom full of students while exploring and navigating the rich complexities of new love and letting go of the woman who left him. (R – 85 minutes)

“People Places Things” is not about big moments; nor does it contain any life-changing revelations. Instead, the new dramedy remains relatively low-impact in terms of both its conflicts and its resolutions. That approach may make it seem somewhat slight in significance but its heart is clearly enormous, as is evident by the warmth that emanates from it and the catharsis for which is it responsible. Star Jemaine Clement delivers a performance that is equal parts humorous and sincere, creating a charismatic character with which we easily identify, complemented by a story that stimulates serious thought about our own past relationships. (Thumbs Up!) 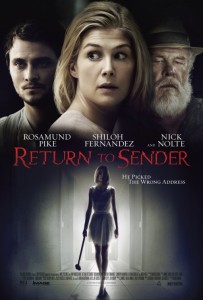 Rosamund Pike plays a woman whose perfect world is shattered by a brutal assault when she agrees to a blind date and the wrong man comes to her door. Desperate for closure, she reaches out to her convicted attacker (Shiloh Fernandez) and slowly builds a relationship with him. But when he is paroled and comes looking for her, she seizes the opportunity to exact revenge. (NR – 105 minutes)

In spite of its far-fetched setup, “Return to Sender” manages to capture viewers’ interest and keep it. Perhaps compellingly charismatic star Rosamund Pike is responsible for this or maybe it is just sheer curiosity that deserves the credit since the story is a bit bizarre. But if the latter is the case, then it is a double-edged sword as the new thriller’s bizarre qualities quickly become ludicrous qualities with its characters’ actions rendering them either unconvincing or unhinged. The film even fails as exploitation due to the brevity and ambiguity of its brutality, which is especially disappointing due to the promising suspense that precedes it. (Thumbs Down!)