‘Criminal Activities’ thrills, ‘Man Up’ charms and ‘Night Before’ cracks up 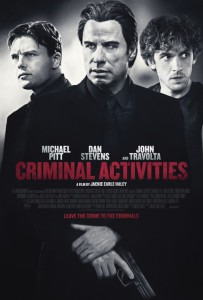 Four friends stumble into a deal too good to refuse. But when the investment goes bad, they learn that part of their funding came from a notoriously ruthless crime boss (John Travolta) and it’s payback time. Now, they must successfully kidnap a family member of a rival kingpin in order to erase the life-threatening debt. (NR – 94 minutes)

There will undoubtedly be a lot of talk – for better or for worse – about the sideswiping third-act twist in “Criminal Activities.” Regardless of your particular perception of said sudden turn of events, the highlight of the new thriller is Jackie Earle Haley’s direction as the actor demonstrates with an exciting style and admiration of the genre his abilities as a filmmaker. The extreme energy and dark comedy is reminiscent of Quentin Tarantino’s greatest works while Haley ensures that both his cast and his audience have an absolute blast from beginning to end. (Thumbs Up!)

Lake Bell plays a woman who is mistaken as a man’s (Simon Pegg) bind date and goes with it. It is going to take a night of pretending to be someone else for her to finally man up and be her painfully honest, awesomely unconventional self. But will he also man up and be able to get over her duplicity? (NR – 87 minutes)

“Man Up” is a cleverly self-aware romantic comedy that pokes fun at the genre’s tropes while also playing by the rules that make such movies so enjoyable and serving up several surprises along the way. Stars Simon Pegg and Lake Bell have a natural charisma – both romantic and comedic – that propels the film forward but it is the smart story that engages viewers’ hearts and funny-bones. The culmination of it all – the quintessential grand gesture scene that has Pegg running through the streets accompanied by a crowd of young partiers – will leave you with a lasting smile on your face and an exorbitantly optimistic outlook on love. (Thumbs Up!) 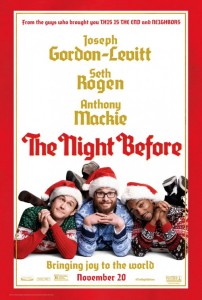 Joseph Gordon-Levitt, Seth Rogen and Anthony Mackie play friends whose yearly Christmas Eve reunion has been an annual night of debauchery and hilarity. Now that they are entering adulthood, the tradition is coming to an end. And to make it as memorable as possible, they set out to find the Nutcracka Ball – the Holy Grail of Christmas parties. (R – 101 minutes)

“The Night Before” is one crazy Christmas party that will occasionally offend you, periodically cause laughter to the point of tears and sometimes even sincerely move you. That balancing act that earns it a place on both of Santa’s lists – naughty and nice – is its greatest attribute. Granted, the new holiday comedy is a far cry from your favorite Christmas classics of yesteryear and its particular brand of humor may hinder some viewers’ enjoyment, but it is also a fun and festive film that enlightens us to live in the moment rather than mourning the past or fearing the future. (Thumbs Up!)