Among the new movies that were released Friday, Dec. 25 are a comedy that combines the skills of Mark Wahlberg and Will Ferrell, Quentin Tarantino’s latest cinematic masterpiece and a dramedy that re-teams the talents of David O. Russell, Jennifer Lawrence, Robert De Niro and Bradley Cooper. 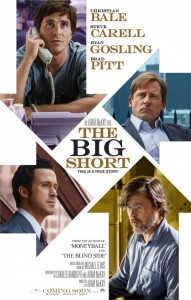 Christian Bale, Steve Carell, Ryan Gosling and Brad Pitt play outsiders in the world of high-finance who predict the credit and housing bubble collapse of the mid-2000’s and decide to take on the big banks for their lack of foresight and greed. (R – 130 minutes)

“The Big Short” features a pair of firecracker performances from Christian Bale and Steve Carell. But that is about the extent of the strengths of the new dramedy that is much more likely to put you to sleep than excite or enlighten. Aside from the undoubtedly dull subject matter and torturously overlong runtime, the movie’s most massive mistake is its condescension. Writer/director Adam McKay frequently pauses the motion picture to talk down to his audience. Here’s a hint: If something needs constant explanation then it has no place passing itself off as entertainment. (Thumbs Down!) 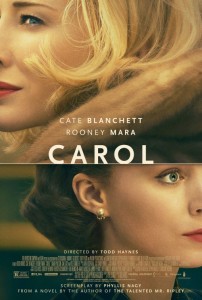 “Carol” is an absolutely beautiful movie – both inside and out. The new drama features excellent performances from stars Rooney Mara and Cate Blanchett, exhibits its setting in such a way that is tremendously transporting and tells a story that is deeply moving. It is a somewhat slow motion picture, though, and that may leave some viewers feeling listless – especially during the second half of the film. The first half takes place at Christmastime and therefore benefits from the accompanying charm. Once the Santa hats and toy trains are removed, the movie is missing a little allure, but its elegance, grace and emotional weight remain. (Thumbs Up!) 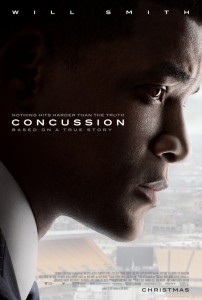 Will Smith plays an accomplished pathologist who uncovers the truth about brain damage in football players that suffer repeated concussions in the course of normal play. (PG-13 – 123 minutes)

“Concussion” has a very vital story to share. Unfortunately, it shares the same elements of said story over and over and over until the viewer becomes numb to it. There is no doubt that the new drama has a deeply important message and features a praiseworthy performance from star Will Smith – and that, combined with a small albeit appealing romantic subplot make it a movie well worth seeing. However, its not a true touchdown much less a motion picture that will accomplish its obvious awards aspirations due to its repetitive and melodramatic nature. (Thumbs Up!) 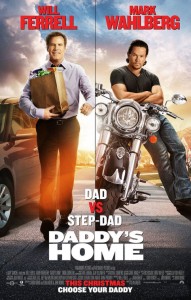 Will Ferrell plays an affable radio executive who finds himself competing for the affections of his step-children following the unexpected reappearance of his wife’s ex-husband (Mark Wahlberg). (PG-13 – 96 minutes)

“Daddy’s Home” is a hilarious almost-family-friendly comedy. Its best bits are the ones that overstep the line and make parents who have brought their young children to see it wonder if they will soon be regretting that decision while its worst ones are those that play it safe and cater to said parents. Will Ferrell is funnier than normal, playing the everyday guy here as opposed to some over-the-top caricature. But Mark Wahlberg is the true star, generating the largest laughs while also traversing a nice character arc that culminates with a finale that is as riotous as it is touching. (Thumps Up!) 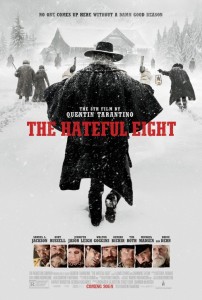 “The Hateful Eight” delivers the most dynamite dialogue of the entire year, creating a compelling, comical and most of all clever production that is quite truly unlike any other movie you have ever seen. It starts off somewhat slow and builds to a second half that is forceful, electrifying and violent beyond belief. Writer/director Quentin Tarantino assembled the perfect cast to put on such a spectacular and stirring presentation with Jennifer Jason Leigh giving the best performance by any actor in all of 2015. This is more than a movie; it is an experience – especially if seen during its road-show run that includes an overture, intermission and 70mm picture. (Breakthrough!) 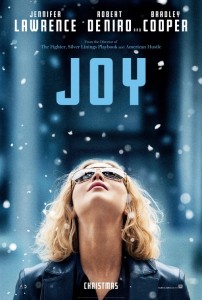 Jennifer Lawrence plays a woman who founds a business dynasty and becomes a matriarch in her own right. Betrayal, treachery, the loss of innocence and the scars of love pave the road as she becomes a true boss of family and enterprise facing a world of unforgiving commerce. (PG-13 – 124 minutes)

“Joy” is a sincerely inspiring motion picture packed with powerhouse performances. Jennifer Lawrence has never been better while her co-stars Robert De Niro and Bradley Cooper – who also shared the screen with her in writer/director David O. Russell’s previous film “Silver Linings Playbook” – are also on their A-game. The story still slightly suffers from the sporadicity that seems to plague Russell’s projects – none more so than “American Hustle” – but it is less troublesome than usual, allowing the audience to feel the weight of the emotion experienced by Lawrence’s character. Seeing her treated so poorly will break your heart; seeing her overcome it will put it back together again better than before. (Thumbs Up!)