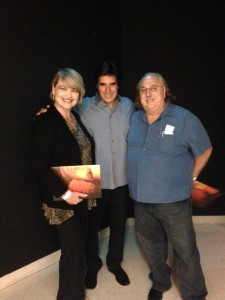 In an age where high tech substitutes for talent, flashy visual effects serve as a distraction and large stage productions separates the audience from the performer, there is one man in the world of “Magic” that performs on pure talent.  His name is David Copperfield. Yes, there are props he uses, such as clear beach type balls, styrofoam material, steel look a-like balls, frisbees, etc. that were thrown into the audience which instantly made them feel part of the show. Yet despite the changes in technology/society, David Copperfield is still the greatest Magician and Illusionist in the world.

David’s use of the showroom as a stage was simply magical. Where most magicians will use the stage as their area where “Magic” is done, David will bring the stage to the audience and perform such feats as having someone disappear right in front of you, watching paper float so gracefully in the air, and witnessing an empty box become filled with a surprise that delighted the audience.

David’s use of humor was the perfect icing on the cake. His sense of timing and improvisation along with his quick wit and timely non-verbal communication was fully integrated not as a supplement to the magic but was completely part of the entertainment. The only time the laughter stopped was when you heard the audience collectively say OOH, AAHH, OMG from the wonderment of how a certain magic trick was possible. There was no time to catch your breath when the humor started coming again. There were parts where the show cleverly implemented “Saturday Night Live” type skits to enhance the experience and create a different take on how magic works.

The show not only had magic and humor interwoven throughout the show, there were sub themes with touching moments with respect to David’s parents and particularly his father.  David’s sensitivity and compassion was certainly present which added a more meaningful experience by not only seeing David as a great performer, but also a great person.

The finale was truly one of the most amazing feats of magic I have even seen. I was sitting in the front row up against the stage, literally 6 feet from where the grand finale took place.    Without spoiling this most amazing “Magical” event, all I can say is I was highly focused on what I knew was going to happen, and I still could not even begin to figure out how the result came about except that great Magicians do exceptional Magic and David Copperfield is exceptional.

David Copperfield can be seen at the MGM Grand, Las Vegas.

As Founder and creator of “Breakthrough Thinking Broadcasting Network” (BTBN) which is a Media / Business model, Dave also is the host and producer of each show under BTBN which includes the popular radio shows “Breakthrough Thinking”  (Business Psychology), “Breakthrough Sports” (Sports commentary, interviews and news) and “Breakthrough Entertainment" (Entertainment related news and interviews). Dave’s abilities extend beyond hosting and producing. He also reports on various sports and entertainment events including interviewing high profile people and organizations. His business skills come from 30 years’ experience of being a CPA and business consultant and owner of (David S. Isaac P.C. - A CPA and Business Consulting firm) as well as his experience, knowledge and education in Neuro Linguistic Programing (NLP). Dave is a certified Master Practitioner in NLP and owner of Designing Success Inside, LLC (www.acceleratedmastery.com) NLP is the study of human excellence. For a complete bio see:   http://acceleratedmastery.com/bio.php