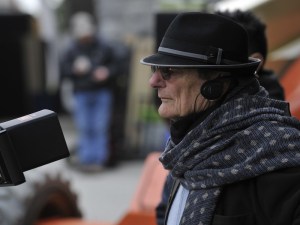 In “Words and Pictures,” which opens Friday, June 6, Juliette Binoche and Clive Owen play an art instructor and an English teacher, respectively, who form a rivalry that ends up with a competition at their school in which students decide whether words or pictures are more important.

Listen to “Breakthrough Entertainment’s” full interview with Schepisi by clicking HERE. The following is an excerpt from the interview in which the director discusses the movie’s stars and message.

“[Juliette Binoche and Clive Owen] were fantastic. First of all, they have always wanted to work together. Secondly, when I put them together, you could see that they had great respect for one another, a great rapport and a very similar sense of humor. So I knew that that was going to be fantastic as a pairing.

“I knew that Juliette painted a little bit but I did not know the depths of her talent and experience. Boy was I happy to find that out because it meant we did not have to fake it. And it was clear that she was prepared to go on the journey as a painter – pretty much the same journey – for different reasons – that her character had to do to go from portraiture to abstract.

“And Clive is a classically trained actor from the [Royal Academy of Dramatic Art] in London. He has got a love for language and he just jumped at this because of that – and because of how well [Gerald Di Pego] wrote the script, how smart the rhythm of the language was and the humor. He got that immediately so that made my job a lot easier, let me tell you.

“[The movie’s message is that] everybody has got a dream in life or expectations of themselves. But at a certain point, they have to kind of realize that they are either not capable of it physically or mentally; that they need to kind of work out where they are and find a way to move forward. Often they are really good at something that they do not expect to be good at – and that is worth just as much as whatever their dream was.” – Fred Schepisi