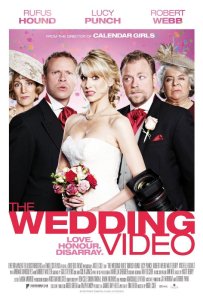 In “The Wedding Video,” which opens Friday, May 9, Lucy Punch and Robert Webb play a newly married couple whose best man (Rufus Hound) decides to capture their wedding on video and present them with it as a gift.

Listen to “Breakthrough Entertainment’s” full interview with Cole by clicking HERE. The following is an excerpt from the interview in which the director discusses his motivations for the movie.

“[The movie operates on] the whole issue of, ‘Whose wedding is this?’ We have got a very domineering mother of the bride and she carries about like it is her wedding. She is out to impress her friends and relatives with creating the biggest wedding that anyone around her has ever seen.

“What I like to do is make people laugh and just when they are least expecting it make them cry. This movie does that and it does that really well. I think that there is a real sucker-punch toward the end that tends to make audiences wipe a tear from their eye.

“You can see all of the men in the audience sort of trying to do it subtly so that no one else notices and all of the women weeping openly. But before that and along the way it is really just a very funny film. And I think that it feels different. I am not sure that it feels like any film that you have seen before – at least not like any comedy that you have seen before.” – Nigel Cole