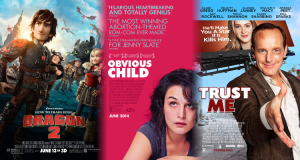 Among the new movies that were released Friday, June 13 are a sequel to 2010’s “How to Train Your Dragon,” a romantic comedy starring Jenny Slate and a dramedy from writer/director/star Clark Gregg about the inner workings of the entertainment industry.

Caitlin Stasey plays a rebel girl who joins her high school cheerleading squad in an effort to take down the captain of the football team. However a supernatural turn of events thrusts the girls into a different battle. (R – 89 minutes)

The first hour of “All Cheerleaders Die” is fairly fun. Unfortunately, the pyramid pretty much completely collapses during the final act, which essentially throws all caution to the wind and not only oversteps the fine line that separates satire and stupidity but outright ignores such a line even exists. It is almost as though writer/director Lucky McKee misses his more serious cinematic efforts like “May” and “The Woman” and disregards the importance of tonal consistency. Until then, though, the new comedic horror flick is an entertainingly dark take on the high school experience. (Thumbs Down!)

‘How to Train Your Dragon 2’

Jay Baruchel once again voices a young viking who this time discovers an ice cave that is home to hundreds of new wild dragons and finds himself at the center of a battle to protect peace. (PG – 105 minutes)

“How to Train Your Dragon 2’s” animation soars far above that of not only most other Dreamworks productions but also a lot of animated adventures produced by other studios as well. There is no doubt that the sequel to 2010’s breakout hit is visually spectacular, mesmerizing audiences of all ages with aerial excitement. Fortunately, its story also suggests that this franchise still has plenty of fire in its belly, breathing life to the endearing theme of the overpowering and unbreakable bond that we humans have with our family members – two-legged, four-legged, winged or otherwise. (Thumbs Up!)

Toni Collette plays a veteran rock journalist who teams up with an eccentric amateur documentary filmmaker (Thomas Haden Church) to discover what really happened to a long-lost rock god who also happens to be her ex-boyfriend. (R – 97 minutes)

“Lucky Them’s” themes about living in the past vs. letting said past lie is both contemplative and compelling. Unfortunately, the story itself never gathers enough steam to make the most of those themes as the search that is at the center of it all keeps getting placed on the back burner in favor of frivolous romantic (more like lustful) affairs. To make matters worse, its characters are flimsy cliches and the only one of them who is even remotely likeable is Thomas Haden Church’s Charlie, who adds some much needed personality to the entire ordeal. The conclusion’s cameo and emotional depth draws us back in but it is too little too late. (Thumbs Down!)

Jenny Slate plays a stand-up comedienne whose unplanned pregnancy forces her to confront the realities of independent womanhood for the first time. (R – 83 minutes)

Some moviegoers are undoubtedly going to be appalled at the way that “Obvious Child” so nonchalantly applies the topic of abortion but the fact of the matter is that the procedure is one of the choices available to women who experience an unplanned pregnancy. And that grounding in reality is actually one of the new romantic comedy’s two most admirable traits – the other being its heartfelt approach in its reflection of relationships in modern times. Despite several scenes centered around stand-up comedy that are not even the least bit funny and a leading lady (Jenny Slate) that is inherently unlikeable, the flick is authentically charming. (Thumbs Up!)

Clark Gregg plays a struggling agent for child actors – and former child star himself – who spends years losing his most talented clients to his slick, arch-nemesis (Sam Rockwell). (R – 90 minutes)

“Trust Me” is a very odd little motion picture. Writer/director Clark Gregg – who also stars in the new dramedy – tries to satirize the entertainment industry, thereby earning audience admiration through laughs, while also adding some depth to his project, thereby earning the title of artist that every filmmaker longs to have. And, at times, the mix is amusing – especially when Gregg’s co-star Sam Rockwell is on the screen. However, for the most part, it is just plain weird – with no scene stranger than the final one during which a character sprouts demon-like wings and flies away. (Thumbs Down!)