Among the new movies that were released Friday, Feb. 20 are a teen comedy starring Mae Whitman, a musical starring Anna Kendrick and a family sports drama starring Kevin Costner. 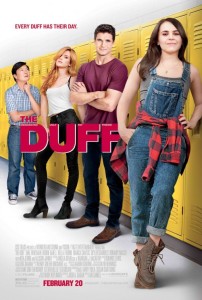 Mae Whitman plays a content high school senior whose world is shattered when she learns the student body knows her as the Designated Ugly Fat Friend to her prettier, more popular friends. She enlists a slick but charming jock (Robbie Amell) to help reinvent herself and overthrow the school’s ruthless label maker (Bella Thorne). (PG-13 – 101 minutes)

In a world occupied by stronger and more universally appealing teen comedies, “The DUFF” would barely pass muster. However, genre anchors “She’s All That” and “10 Things I Hate About You” were introduced more than 15 years ago and it has been almost five years since the release of the last solid entry – “Easy A.” So, all things considered, the new movie is an adequate although unremarkable effort that will probably please middle and high schoolers a great deal while being passably entertaining to everyone else. It certainly suffers from an identity crisis, though, sometimes cynically superficial and other times explicitly preachy. (Thumbs Up!) 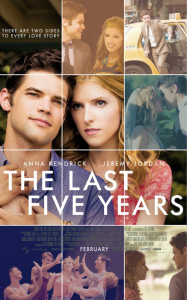 “The Last Five Years” effectively captures the highs and lows of a relationship in such a way that simultaneously inspires viewers and pulls on their heartstrings. Writer/director Richard LaGravenese’s cinematic adaptation of Jason Robert Brown’s musical stage play may require a bit more effort from its audience as they attempt to wrap their minds around the story’s dueling perspectives and chronologies, but the emotionally-charged rewards are remarkable. As are the songs, which are meticulously complex yet infectiously catchy. And then there are the film’s stars Anna Kendrick and Jeremy Jordan, who are as charismatic as their performances are captivating. (Thumbs Up!) 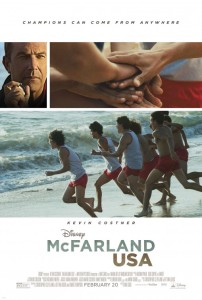 “McFarland, USA” may trip up a few places along the way but, fortunately, those minor mistakes do not affect its ability to cross the finish line as a heartwarming winner. Disney’s new cross country sports drama, which is based on a true story, runs along a path that certainly often used by the genre. Director Niki Caro does not really take any risks but she does not need to as the experience is enjoyable enough and the end-result is emotionally energizing. It could have benefited from a quintessential match montage as the runners seem to climb a sudden 90-degree-angled hill but that does not affect the film’s capacity to inspire. (Thumbs Up!)