‘Effie’ is elegant, ‘Furious 7’ is exciting and ‘While We’re Young’ is empty

Among the new movies that were released Friday, April 3 are a costumed drama written by and starring Emma Thompson, the action-packed swan-song of late actor Paul Walker and a cross-generational dramedy written and directed by Noah Baumbach.

Andrew Cheney plays a British East India Trading Company assassin who seeks to redeem his past by thwarting a plot against a young nation’s hope for freedom. (PG – 100 minutes)

When you take into account the fact that “Beyond the Mask” is a faith-based flick, its scale is certainly impressive, mirroring more of a big-budget blockbuster than the genre’s generally independent roots. Unfortunately, bigger does not always equal better, as is the case with this cluttered effort that may suffer from trying a tad too hard to appeal to all audiences. One’s attention tends to drift more often than not during the movie. Its admirable messages are there but are not concretely relayed therefore feelings fall short of inspiration. The scenes with Ben Franklin are fun but even they are more about novelty than anything. (Thumbs Down!)

Dakota Fanning plays a young woman who, through a marriage to a much older man (Greg Wise), comes of age and finds her own voice in a world where women were expected to be seen but not heard. Emma Thompson also stars. (PG-13 – 108 minutes)

“Effie Gray” paints a dreary picture using the dullest colors imaginable – but that approach is actually appropriate and therefore effective in achieving the intended impression. Director Richard Laxton mirrors the movie’s refined atmosphere when handling some strikingly dramatic revelations that come about as part of the new costumed drama’s plot thereby removing any and all romance while illuminating the stiff suffering experienced by its characters. Stars Emma Thompson (who wrote the screenplay) and Dakota Fanning portray said characters with sheer elegance and manage to say something significant about early feminism without needing any particularly powerful crescendos. (Thumbs Up!) 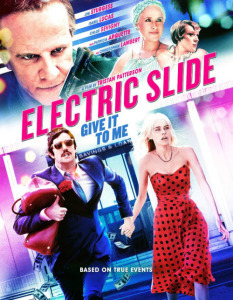 Jim Sturgess plays a hip and charismatic dealer of antique furniture for the rich and famous who, to pay off the debts he owes loan sharks, begins a spree of bank robberies across 1983 Los Angeles with his cool and aloof girlfriend (Isabelle Lucas). Patricia Arquette and Chloë Sevigny also star. (R – 95 minutes)

“Electric Slide” is an exceptionally cool motion picture. In fact, the film is so deliberately stylish that it initially alienates viewers who may be put off by its inherent smugness. However, those who are patient will soon discover that there is a rhyme and a reason to said swagger as it charms them just as star Jim Sturgess’s character charms female bank tellers. As a result, we feel immersed in the movie’s atmosphere and captivated by its story, which winds up featuring a few sincerely suspenseful moments that are made even more entertaining thanks to the eccentricity of it all. (Thumbs Up!) 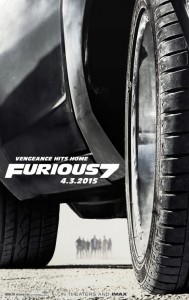 “Furious 7” somehow beats the odds and ups the ante yet again, delivering a few action sequences that drive circles around those that blew us away in the film franchise’s six previous installments. The latest entry also fixes the pacing problems that plagued its two predecessors, cutting back on the melodrama and simply serving up extreme excitement in the form of vehicular implausibility. Most importantly, though, it features a finale that is as fitting as it is touching, treating the real-life loss of star Paul Walker in such a way that will guarantee tears but also some surprisingly universal spiritual comfort. (Thumbs Up!)

Rinko Kikuchi plays a young woman who mistakes the film “Fargo” for a documentary and fixates on the scene where a suitcase of stolen cash is buried in the desolate North Dakota landscape. Believing this treasure to be real, she leaves Tokyo behind to recover it and finds herself on a dangerous adventure unlike anything she has seen in the movies. (NR – 105 minutes)

“Kumiko: The Treasure Hunter” has the unfortunate distinction of being a better idea than it is a movie. Perhaps filmmakers David and Nathan Zellner were far too smitten with their admittedly very clever concept to remember that they also had to develop an engaging story to surround it. The new drama starts off slow and never picks up any steam, restricting its protagonist to two brief pit stops on its way to an frustratingly underwhelming conclusion rather than truly embracing the plot’s potential for peculiarity. There are certainly moments of ingenuity but the bigger picture is a bit too ambiguous to sincerely satisfy. (Thumbs Down!) 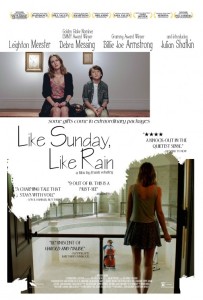 Leighton Meester plays a young woman who, estranged from family, having slacker boyfriend troubles and fired from her waitressing job, takes a job as a nanny of a 12-year-old cello prodigy (Julian Shatkin) who, surrounded by wealth and living with abundant resources in Manhattan, lives a solitary life lacking only frequently absent parents and friends. (R – 104 minutes)

“Like Sunday, Like Rain” starts strong but slowly devolves into a snooze-fest of a film. In fact, its nearly dialogue-free finale that comes complete with lullaby-like music is almost certain to send you into dreamland. Fortunately, you will not be missing much as writer/director Frank Whaley is unable to conclude his tale in such a way that is satisfying or even possesses much of a point – which is a shame considering the flick’s first half is intriguing albeit a bit weird thanks to a nerve-gratingly precocious protagonist. Its weakest link, however, is Billie Joe Armstrong who would be well advised to stick with singing and avoid any additional acting opportunities. (Thumbs Down!)

Ben Stiller and Naomi Watts play a middle-aged couple whose career and marriage are overturned when a disarming young couple (Adam Driver and Amanda Seyfried) enters their lives. (R – 94 minutes)

“While We’re Young” may have worked a lot better as a sitcom than it does as a feature film. After all, sitcoms can get away with possessing very little plot and throwing occasionally amusing jokes around aimlessly whereas such frivolity is often frowned upon in feature films. On the other hand, being boring is frowned upon in sitcoms so even that medium may have been a bust. Regardless, writer/director Noah Baumbach’s new cross-generational dramedy is a wannabe-hip disaster that flounders around before eventually coming to a close without any climax whatsoever. Worst of all, it is emotionally empty and utterly unrelatable. (Thumbs Down!)