‘Eve’ is encouraging, ‘Krampus’ is campy and ‘Murray’ isn’t merry

Among the new movies that were released Friday, Dec. 4 are three Christmas movies – an ensemble dramedy, a horror comedy and a star-studded special. 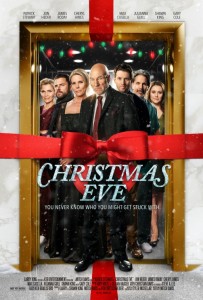 When a power outage traps six different groups of New Yorkers inside elevators on Christmas Eve, they find laughter, romance and a little holiday magic will get them through – and change their lives in unexpected ways. Stars include Patrick Stewart, Jon Heder, Cheryl Hines and Gary Cole. (PG – 96 minutes)

“Christmas Eve” – much like the holiday itself – is about human connection and how people change people. While most holiday films focus on families, writer/director Mitch Davis instead centers his story on strangers or, at the very least, characters whose association with one another is ordinarily quite minimal. However, when a power outage traps them together inside of various elevators around New York City, they quickly discover the impact a few hours of communion – or, in one character’s case, isolation – can have on their lives. The film features an excellent ensemble cast and some truly touching conversations that encourage genuine introspection. (Thumbs Up!)

Emjay Anthony plays a young boy who, when his dysfunctional family clashes over the holidays, is disillusioned and turns his back on Christmas. Little does he know, this lack of festive spirit has unleashed the wrath of Krampus – a demonic force of ancient evil intent on punishing non-believers. Toni Collette, Adam Scott and David Koechner also star. (PG-13 – 100 minutes)

We have finally got a new Christmas classic and its name is “Krampus.” Granted, it is a bit different than your typical holiday fare. The movie is scarier, darker and significantly more cynical than, say, “The Polar Express.” But the new horror comedy reflects the reason for the season every bit as perfectly as past motion pictures that have become annual traditions. In addition to scaring the naughty out of its viewers while providing plenty of opportunities for relief from the festive ferocity in the form of laughter, it features a few heartfelt moments and an admirable message about how the holiday spirit just ain’t what it used to be. (Thumbs Up!) 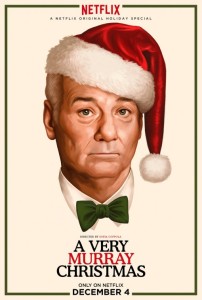 Bill Murray worries that nobody will show up to his holiday special due to a massive snowstorm in New York City. Through luck and perseverance, guests arrive at Gotham’s Carlyle Hotel to help him – dancing and singing in holiday spirit. Co-stars include George Clooney, Miley Cyrus, Amy Poehler, Michael Cera, Chris Rock, Maya Rudolph, Jason Schwartzman and Rashida Jones. (NR – 56 minutes)

Only the pairing responsible for the 2003 snoozefest “Lost in Translation” could make Christmas such a boring affair. Filmmaker Sofia Coppola and actor Bill Murray reteam for “A Very Murray Christmas,” a holiday film/special hybrid. And although the project briefly shines brightly during what is essentially a dream sequence (starring George Clooney and Miley Cyrus), it is mostly a morose monstrosity that is not the least bit merry. You are more likely to fall asleep or slit your own wrists than laugh, dance or feel the least bit uplifted by this exceptionally sad presentation. (Thumbs Down!)