Among the new movies that were released Wednesday, July 1 are a faith-based patriotic drama about two strangers’ journey to the Vietnam Veteran Memorial in Washington D.C.; a sequel about a group of gyrating male entertainers’ journey to a stripper convention in Myrtle Beach; and a sci-fi actioner about a man, a woman and their T-800’s journey to the 80’s.

‘Faith of Our Fathers’ 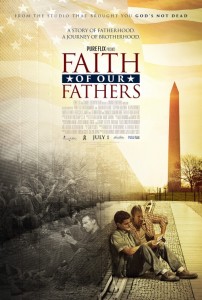 David A.R. White and Kevin Downes play strangers who, guided by letters handwritten from their fathers from the Vietnam War battlefield, embark on a journey to the Vietnam Veteran Memorial in Washington, D.C. Along the way, they discover that the devastation of war cannot break the love of a father for his son. (PG-13 – 100 minutes)

“Faith of Our Fathers” is a movie that uniquely tackles topics from both a faith-based approach and a patriotic perspective. The new drama deals with a variety of subjects such as father-son relationships, honoring our Veterans, appreciating our freedoms, respecting one anothers’ ways of thinking, remaining loyal to our friends and to ourselves and trusting that everything happens for a reason. At times its pontificating becomes a bit too potent but fortunately the unraveling narrative and the uncommon dynamic between David A.R. White’s and Kevin Downe’s characters keep it grounded and engaging. (Thumbs Up!)

Channing Tatum reprises his role of a stripper who, on the road with his friends for their final show in Myrtle Beach with whistle stops in Jacksonville and Savannah to renew old acquaintances and make new friends, learns some new moves and shakes off the past in surprising ways. (R – 115 minutes)

Forget superheroes, natural disasters and dinosaurs; There is absolutely no doubt that “Magic Mike XXL” will provide female moviegoers with the greatest thrill they have in a theater this summer. The new sequel delivers precisely what women have been hoping it would – good-looking, hairless, muscular men gyrating provocatively. It may also be the perfect film for guys too, serving as equal parts entertainment and education. Its characters’ compelling conversations convey the message that you need not have the abs or dance skills of star Channing Tatum to make a girl swoon; All you need to do is remind them – all of them – that they deserve to be worshiped. (Thumbs Up!) 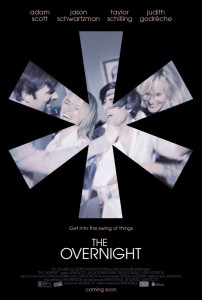 Adam Scott and Taylor Schilling play a young couple that, in an attempt to acclimate to Los Angeles, spends an increasingly bizarre evening with the parents (Jason Schwartzman and Judith Godrèche) of their son’s new friend. (R – 80 minutes) 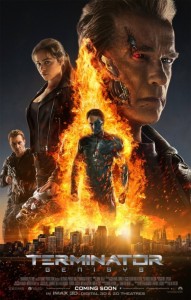 Jai Courtney plays Kyle Reese who is sent back in time by John Connor (Jason Clarke) to protect Sarah Connor (Emilia Clarke). But when he arrives in 1984, nothing is as he expected it would be. Arnold Schwarzenegger also stars. (PG-13 – 119 minutes)

Seeing Arnold Schwarzenegger return to the role of a T-800 is undoubtedly something that will thrill viewers – especially those who were around in the 80’s. That thrill, however, may be the one and only reason to see “Terminator Genisys” as the new actioner eventually devolves in confusing sci-fi nonsense. After an annoyingly noisy yet mercifully momentary prologue, we travel to the 80’s and have nearly as much fun as we did in the franchise’s first and second entries. But our stay is brief as the bulk of the film takes place in an undistinctive 2017 that drains the movie of its vividly nostalgic appeal. (Thumbs Down!)