Among the new movies that were released Friday, Feb. 13 are the steamy cinematic adaptation of a bestselling book and a syrupy sweet romantic drama about courtship in contemporary America.

Dakota Johnson plays a college student who enters into a masochistic relationship with a businessman (Jamie Dornan) whose desires for extreme intimacy pen from secrets in his past. (R – 110 minutes)

Do you like to be punished? Well look no further than “Fifty Shades of Grey,” a romantic drama about BDSM that doles out way more pain than it does pleasure. The new cinematic adaptation of the steamy bestselling book certainly satisfies one’s curiosity but that’s really about it. There are a few effectively stimulating moments but they occur during the… let’s call it foreplay, through dialogue and body language, while the rest of the movie – especially the obligatory sex scenes – is surprisingly boring. Of course, the film’s shockingly poor opinion of women is its worst offense of all though. (Thumbs Down!) 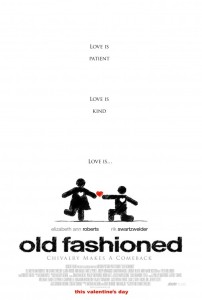 Rik Swartzwelder plays a man who must step out from behind his relational theories while Elizabeth Roberts plays a woman who must overcome her own fears and deep wounds as they attempt the impossible – an “old-fashioned” courtship in contemporary America. (NR – 115 minutes)

“Old Fashioned” is not only a wonderful film, it is also an absolutely essential one – especially during this day and age when intimacy seems to be on the endangered species list. The new romance flick may be a bit syrupy sweet at times but its immensely amorous outlook is prodigiously charming. Star Rik Swartzwelder, who also wrote and directed the movie, is guaranteed to enchant women while motivating men to adopt his character’s starry-eyed ideals in hopes that they, too, can win the heart of a woman even half as mesmerizing as his co-star Elizabeth Roberts. (Thumbs Up!)